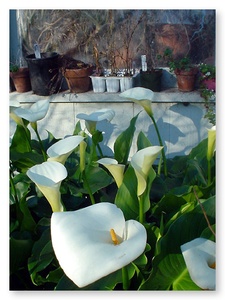 Calla Lilies belong to the family Araceae, just like Tabatha the Titan, Jack in the Pulpit, and Dragon Lily. Contrary to what their name suggests, they are neither Callas (Calla palustris) nor true Lilies (Liliaceae). These South African natives are herbaceous perennials with pointed or heart shaped leaves from 1½ to 3 feet tall - some may have white speckles on their dark green leaves. Most calla lilies require a period of dormancy after blooming, during which time you should gradually withhold water and allow the plants to rest for two or three months. Callas prefer warm weather for their best growth, and appreciate full sun to partial shade. Calla lily blossoms look very much like those of the common Jack in the Pulpit, and are not actually lilies at all! The flower is actually a modified leaf structure, a spadix, that surrounds hundreds of actual flowers located on the rod-like spathe. After blooming the flower stalk droops, the spadix reverts to the same green as the foliage surrounding it, and the fleshy green seeds quickly grow to resemble a miniature ear of green corn. As these dry and ripen to brown, the seeds should be planted right away, pressing them into moist soil uncovered. Warm soil is a requirement vigorous growth. 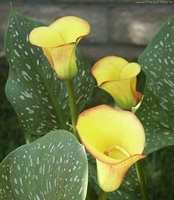 A cultivar of the wild variety of Zantedeschia elliottiana called Flame. The White Calla Lily or Giant Calla Lily (Zantedeschia aethiopica) can tolerate a wide range of moisture conditions. It's perhaps the hardiest of the species and can attain a height of about 4 feet. Unlike other Calla lilies, they are frost hardy and do well in temperate climates. Because of these characteristics, white calla lilies are considered an invasive species in coastal parts of California (but not in the Sacramento Valley).

The Yellow Calla Lily (Zantedeschia elliottiana) is the species most frequently cultivated in the United States because of its hardy nature. It's spotted leaves and tall spadix help identify it from the other smaller members of it's genus. It is frequently crossed with other calla species to get a wide range of flower colors, from deep purple to orange.

It is important to note that callas are poisonous to humans, fish, dogs, cats, and parrots; clinical symptoms include burning and irritation of the mouth, excessive drooling, vomiting and difficulty in swallowing.