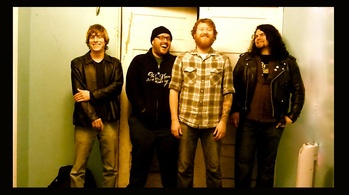 Calling Morocco in The Shack

Calling Morocco is a local band that has been described as "alt-everything", pulling influences from rock'n'roll, alt-country, pop and punk rock. Their debut album Outside Providence was released in May 2011 to excellent reviews. The group is composed of:

To hear the bands album, Outside Providence, you can stream it on their bandcamp page.