Cameron Menezes was the ASUCD Controller until Winter 2005. He was also on the ASUCD Senate from Winter 2003 to Winter 2004 and was a member of Student Focus.

According to the facebook group page of the Christian Democratic Party, Cameron is thier ASUCD advisor. 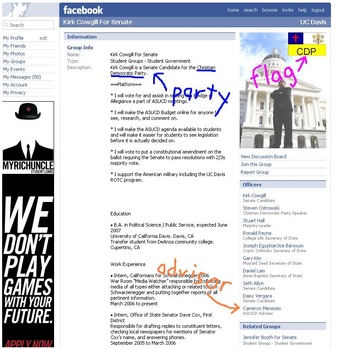 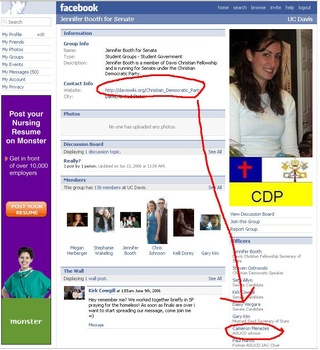 To be consistent with the demographic issue you can't prove he is an advisor just because I make him one, just as there was an argument as to how many members are in the Christian Slate. Unless you want me to label Paul Harms as another one of our advisors I would stop using facebook to make such wild claims. Upon receiving this message I hope that this comment among all others will end. Steven Ostrowski

2006-07-03 18:51:11   rofl, let's keep everything secret!! just hide it if people find out and mention it. whatever it takes to win!! don't forget to take his name off every other "X for Senate" group...with such sloppy records hiding, how will you ever have a political career post graduation? —EdwinSaada

2019-02-26 15:01:30   Having accomplished absolutely nothing as the ASUCD Controller, except for putting ASUCD under IRS radar this retired former ASUCD member has been creating accounts of new ASUCD members. You are sick leave those kids alone. Nobody even remembers you and you supposedly was a member of Student Focus but your name isn't even on their page. http://www.freerepublic.com/focus/f-news/1250653/posts —Random