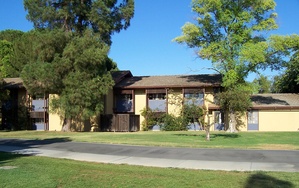 Campo Hall is like a palisade wall for all.

Campo Hall is a two story building on UC Davis campus. It is located on the outer West side of Regan residential halls. It is the first Regan dorm visible from the Segundo D.C., acting as a wall of sorts - like one might expect to protect the Regan courtyard from barbarian invaders from the west. Yawen used to live there when she was a freshman. In 2005-2006 one story (most likely the first) was used to house either Korean exchange or Korean transfer students. In 2016-2017 Campo's first floor hosted the Native American LLC, though many of the first floor residents were actually international students.

Campo's hallways, presumably like those of the other Regan buildings, are significantly narrower than those in the newer buildings. Additionally, with only one full bathroom for each gender, around 40 girls share one bathroom and 20 guys share the other. But the rooms are also bigger and more square (with actual closets!).