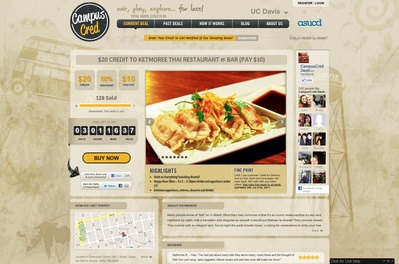 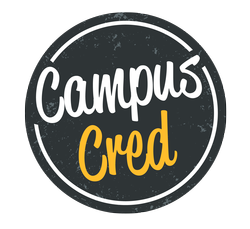 Originally founded at UC Berkeley, CampusCred is a Groupon knockoff that caters to only those with a ucdavis.edu e-mail addresses. Non-UCD staff Townies are out of luck. Their focus is to introduce students to local businesses and eateries within their community. For those not familiar with the Groupon business model, they basically sell coupons to local businesses at a discount of 50% or more. For example, their first deal was a $20 credit for KetMoRee that you could buy for $10. Each deal is available for a few days before being replaced with a new one. Check the "fine print" section beneath each offer - there may be limitations.

CampusCred uses the tagline "only for students by students!" Although it is run and managed locally by Davis students (juniors Sherry Wang and Nikhil Sheel are mentioned as local directors in an Aggie article), it is owned by non-students.

CampusCred has nothing to do with ASUCD aside from paying for the right to use their logo. For a while the logo was displayed prominently on the webpage, as though the site were run by ASUCD. At best it was confusing; and it was probably deliberately deceptive. The process by which they first got permission to use the logo led them down a bumpy road, as well. They originally signed an agreement with Mark Champagne who was unaware he had had no authority to license the logo. When it was pointed out that Mark lacked the proper authority to license the logo, they received the proper license from the senate (see sr07.w11.pdf). Meanwhile, Occupy Davis is protesting corporate money in politics. Hmmm...

When they first started up, they also sent out an unsolicited spam e-mail to many ucdavis.edu e-mail addresses. Presumably, they got the mailing list from ASUCD, which is pretty shady in itself. The list seemed to only include undergrads, as some faculty, alumni, and graduate students have reported not getting the e-mail. They also distributed fliers in many classrooms when they were first getting started.

Those associated with the organization constantly try to whitewash this page as well.

2011-01-31 19:04:35   Was not a fan when UCD made a deal with US Bank and I tend to avoid most businesses that try to get through to students using some weird contracts with the school (Sodexo), so a business that gets started in Davis with a potential scandal with one of my favorite groups on campus (ASUCD)? Sounds awesome (yes sarcasm). —hankim

2011-02-01 19:51:26   Some feedback on the CampusCred website: the placement of "UC Davis" and the ASUCD logo up in the header, without any explanation or anything, makes it look as though it's a program run by the ASUCD. If it's unintentional, it's simply a matter of confusion. If it's intentional, it's disingenuous. I know a couple of people have voiced this concern here on the Wiki, and it came up with another person in an off-wiki conversation recently. To the several representatives who've contributed to this page: it'd be great if you could take a closer look at the logos and figure out a way to use them that doesn't give readers a false impression. —TomGarberson

2011-02-21 21:46:28   We have removed the ASUCD logo pending the passing of the bill despite our 90-day grace period. We are not trying to misrepresent anything and all the confusion will be settled until it is passed. Thanks. —Nsheel

Now are you going to explain your attempt to spam the student body? —WilliamLewis

2011-04-25 23:10:12   I remember walking into one of my classes in Olson Hall last quarter and seeing fliers for this taped to the back of every other chair. Although they're not the only group spamming stuff on campus, I find it curiously shady. Kind of like those "students" who show up on the first day of classes and make a short presentation about that textbook website... —CecilioPadilla