There are multiple types of unofficial campus mugs. Holding anything liquid that you'd like, here is the history of our beloved mugs.

R4 Recycling gives out a large number of mugs throughout the year. They are usually won by playing Plunk-a-mug. Their agenda is to reduce waste by offering people reuseable mugs. The designs of the mugs usually stay the same every time they order a new batch but there are slight changes. Only a true mug connoisseur can tell you when you got the mug by looking at the small details. These are the same mugs that are sometimes used by the Whole Earth Reusables Cooperative. R4 staff are known to spot people using any reusable mug and totally freak out about how happy they are then give the person a Spot-a-mug coupon that entitles them to a free beverage.

DC mugs are good for two things: Smuggling food out, and smuggling vodka in. They are given to Freshmen. Each Dining Commons has a different design and they are changed every year. Besides smuggling food out of the DC, one could also take drinks out - duty free. These University Dining Services mugs may be filled for 75¢ at the ARC, Med-Sci Café & Scrubs at VetMed, and at the Silo (Pub included). 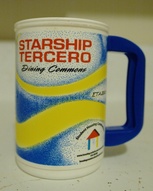 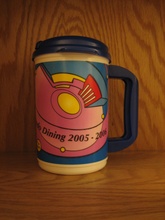 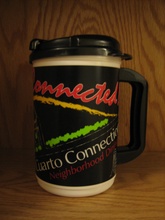 I remember the mugs we got. I lived in Segundo the year they were building the three new buildings. Due to all the construction (unfortunatly on both sides of Malcolm Hall), everyone in Segundo received a bonus pack of goodies with our mug. If I recall correctly, we got two throughout the year, everyone in the other dorms got 1. Those things were used for smuggling any and all food out of the Dining Commons. Cereal and ice cream specifically. —ES

This mug is given to physics students with a thermometer so that they can make a simple bomb calorimeter and perpetuate the incorrect Bohr model of the atom.

does anyone know who or what company makes these? - alg

Well, the bottom of my mug (the Oxford DC one) says "Whirley DrinkWorks!" and has a website www.whirley.com, so I'm guessing they do.

I think this blue mug may be the first refillable cup that the Coffee House sold and offered discounts for using (at least to my knowledge). It's circa 1989, from the previous very tiny Coffee House building that held just a few tables. (The sticker was not part of the mug, of course.) Apparently, this mug and the one following were made by Aladdin in Nashville, Tennessee.

This purple mug came out a little later, maybe circa 1991.