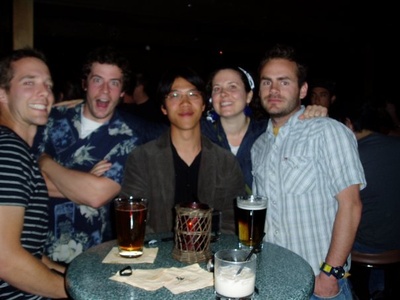 The core members, ready for action on Tuesday night.

Canadian Softwood, or CS, is a trivia team that competes regularly on Tuesday nights at Sophia's Bar. By Kevin's own admission, they are the winningest team in the short history of Sophia's trivia night, circa 2008. They once won for an unprecedented four weeks in a row and their most recent win came on April 1, 2008. The group combines the best and the brightest in trivial knowledge from Seattle, Florida, Toronto, Boston, and Wisconsin. Currently, their only consistent and formidable challenge comes from the Mathletes, who are a distant second in terms of total career trivia night victories. Both The Mathletes and CS now pale in comparison to the Gen Y Booers in terms of most wins and 1st place wins in a row.

The team has five core members who compete every week, barring a tragedy or a very special honor, such as an invitation to visit the White House. The latter is actually fairly common. It is not uncommon for CS to take on a "special guest" to fill the team's sixth allotted slot. Every special guest is given the chance to prove him or herself in the hopes of being accepted as a permanent member. In approximately 18 months of competition, nobody has been invited to join the team permanently.

Canadian Softwood owes its trivia night supremacy to its unparalleled depth of knowledge. All five core members are PhD students in Agricultural and Resource Economics with insatiable curiosity that extends well beyond their dissertation topics coupled with sponge-like brains. The team has only one Achilles' heel, namely the Tiebreaker question. Any team that manages to achieve the same total score as CS, a very impressive feat on its own, actually has a fair chance of winning first place because CS has repeatedly missed the correct tiebreaker answer by several orders of magnitude.

All CS core members are also avid Beer Pong players and have issued an open challenge to any other trivia team wishing to settle a feud outside of Sophia's.

Unlike many celebrities, the members of Canadian Softwood have a close relationship with their fans. On many Tuesday nights, the group can be found outside of Sophia's after the competition, shaking hands and enjoying conversations with their fans and admirers. Their fans are encouraged to join the Facebook group dedicated to Canadian Softwood and show their support.

Canadian Softwood, in its most familiar and beloved incarnation, will not be seen again until September, 2008. One of its finest members has embarked upon a research mission of the highest importance to the global economy. Most weeks, the team members still within the US can be found at Sophia's winning under various other monikers.

On April 15, 2008, in honor of Tax Day, those members of Canadian Softwood still within the United States hosted trivia for a night. Many participants commented that it was the best trivia night they had ever been to. Some went so far as to say that it was the best night of their lives. In a show of support, the iconic team was greeted with a standing ovation from the teams both inside and out on the porch when it was first announced that they were the hosts of the evening.

2007-10-24 10:52:21   I've recently moved out of Davis, and my team is no longer together. The reason we don't have a name is that, as per Sophia's tradition, we changed our name every week (Canadian Softwood seems to be the only team that doesn't conform to this fun tradition). My team consisted of a few different people, but consistently Erik, the philosophy student who was guest trivia master in January of '07. My userpage now has a pic of me. I'm sure one of your teammates will remember me. Around Oscar time, we took first place by beating you guys by a point. As it turns out, they forgot to give us credit for "who won the first Best Picture Oscar," to which we correctly answered "Wings." No one else answered that question correctly, so Kevin agreed to give us a $10 prize because it was a stumper. Right after I talked with Kevin, your team whined to Kevin that one of his answers was wrong, and tried to bully him into believing you guys were right. Getting credit for a mis-score is one thing, but arguing over the infallibility of Kevin's knowledge is both against Trivia Rules and is made you guys look like a bunch of sore losers. Plus, I looked up your "correct answer" afterwards, and you guys were totally wrong. Anyway, after a couple a minutes of bothering Kevin, I said, "you know, we still won— they forgot to give *us* credit on another question." The look on your grade-grubbing faces was priceless, and was worth far more than the $80 in prizes (I answered two stumpers). As for you stating that my claim above is a lie, and removing my content, I'd be happy to cite some of your other instances of sore losing and point grubbing should you wish. —CraigBrozinsky

2007-10-24 15:21:00   This long winded comment, which unfortunately did not come with an intermission, reeks of somebody desperately trying to hold on to long-gone glory. Glory, I might add, that only the poster of the comment seems to recall. —colte94

2007-10-24 15:43:55   It's interesting that Canadian Softwood seems to have more comments from people who dislike them or think they're arrogant than people who are 'fans'. —BobSled

2007-10-24 15:52:21   Oh, colte94, I think you'll find that a fair number of people remember the incident Craig mentions. And, for reference, "glory" generally requires that other people actually like you. —ErikJ

2007-10-24 17:00:49   It's also interesting to note that the people who dislike CS also, coincidentally I'm sure, happen to be the people that consistently lose to them. Regarding the "Oscar" incident: first, anybody who believes that there are people outside of the teams actually involved who remembers the incident is completely deluded and second, the mis-score was a result of a calculation error (i.e., the quizmaster summed up the total incorrectly) and not due to a disputed answer. Kevin has never changed an answer for CS, even when he knew he was wrong. —Hank

2007-10-25 14:39:30   I only remember grade grubbing once. There was a question about what is the symbol would you use if you measured the sample variance of a population, and the "official" answer was sigma. But as all nerds know, sigma is the symbol for the true variance, not the sample variance and certainly not the estimated sample variance. (The wording of the question changed slightly between askings so we were not sure if it was estimated or not.) If one of the undergrads I TA confused these two things, I'd take off points, so it was good the question was thrown out. Are we geeks? Yes. Did the mathletes also get confused? Yes. Is this grade grubbing? Not if you are willing to stand up for statistics and embrace dorkiness with all the hats, s's and greek letters it entails. ¡Via la Canadian Softwood! —FloridianPlywood

2008-07-02 20:29:18   Why hasn't anyone ever challenged us to beer pong?! Is it because they're afraid of being crushed? I bet you three premium drink tickets we could take any team. —FloridianPlywood