Gnome and Reader Alert: Some of the information on this page is out of date, due to the fact that recreational use of cannabis has only been legal for adults over 21 years of age in Davis since 2016.  It would be great if you'd help the community by editing and updating this page!

Cannabis, often called marijuana, is an annual flowering plant and the derived products of the plant.  Related to hops, it has quite a few names including weed, pot, and ganja.  When discussed within a scientific or legal context, cannabis is the generally accepted term.

The City of Davis has a website that explains the local laws and regulations.  The city includes an additional 10% tax on all non-medical cannabis businesses.

Davis had a moratorium on cannabis retailers until July 4, 2017. Prior to that time there were recreational delivery services to Davis from places like Sacramento. The city then began passing a series of resolutions to plan the infrastructure for Davis' own commercial cannabis businesses. Since then, a series of licenses were granted to both storefronts and delivery services based in Davis. The first cannabis storefront in Davis opened on September 14, 2018.

There are two head shops in Davis these days with a fairly decent selection.  You can buy hemp products all over town and obviously the Whole Earth Festival causes a cloud to descend on the city

Some think that this substance is one of the cornerstones of Davis life and culture and that if Davis wasn't so full of good grass then it would be full of a lot of bored and angry college kids. Others disagree and think it is the scourge of the earth. Some Davisites also believe that cannabis is a gateway drug ... to awesomeness. Of course, its nickname "demon weed" also points to others blaming it for quite a bit of sadness and pain. Folks that smoke a ton of weed are commonly referred to as stoners or potheads.

Oregano in a water pipe 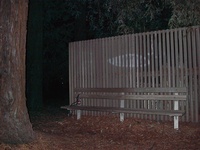 one of many UCD campus smoke spots, notice the graffitied joint

Many of the laws and enforcement standards at local, state, and federal levels have undergone a significant overhaul in the 21st century, initially lowering penalties, and then slowly granting more legal use.

In 2016, California voters approved recreational use for adults through Proposition 64.  Medical Marijuana laws are also in effect and can be found here. Even though there are medical marijuana laws in California, the U.S. still classifies marijuana as a schedule 1 drug and sometimes enforces over California laws, including for medical marijuana. 420 Relief, now out of business, was a place in Davis where marijuana cards could be obtained by qualifying patients in order to have legal medical access.

Former Davis City Code that banned Dispensaries - 40.26.275: Prohibition of Medical Marijuana Dispensaries. Medical marijuana dispensaries are prohibited in all zoning districts, including without limitation to all planned development districts. The city adopted this ordinance because of the conflict between federal and state law on medical marijuana.

In 2010, possession of an ounce or less was downgraded from a misdemeanor to an infraction. In effect, this means that the consequences of getting caught with a moderate amount of pot were no greater than if you were to receive a mild traffic citation. All that lingers was the $100 fine, although the matter is public record and could show up in a background check.

Previously, Proposition 36 passed in 2000 which made the penalties for possession of marijuana much lighter. Possession of an ounce (28.5 grams) or less was no longer an offense for which you could be arrested.  It became a misdemeanor punishable by a $100 fine with no jail time. The court could also take away your driver license for up to a year. Possession of paraphernalia was punishable by a civil fine of $200-300 for the first offense, more for subsequent offenses. Penalties for the sale and cultivation of marijuana are much greater.

on a bench in the Mace Ranch Park Gazebo

You will not be able to see his eyes because of Tea-Shades, but his knuckles will be white from inner tension, and his pants will be crusted with semen from constantly jacking off when he can't find a rape victim. He will stagger and babble when questioned. He will not respect your authority. The Dope Fiend fears nothing. He will attack for no reason, with every weapon at his command — including yours. Beware. Any officer apprehending a suspected marijuana addict should use all necessary force immediately. One stitch in time — on him — will usually save nine — on you.)

Marijuana Anonymous For those who find that their use is out of their control and affecting their lives, Marijuana Anonymous (MA) is available. MA is a 12 Step program guided by the 12 Traditions. A belief in a "higher power" is suggested but not mandated: only "a desire to stop using marijuana" is needed.

Other Recovery Options Other recovery options include medical treatment (talk to your physician!), LifeRing, SMART Recovery and other 12 step programs with a "general consumer" scope, such as Narcotics Anonymous or Cocaine Anonymous which welcome potheads. All have online information, chat, and meetings and other help for those who have lost control over their use. Many churches have 12 Step programs that don't follow the 12 Traditions.

I would suggest getting caught by the police rather than your mother. They really are much easier on you.

If you have more than 1 ounce and are not medical you could get get charged with a misdemeanor. Possession with intent to sell any amount of marijuana is a felony. If you are driving, and the cops find weed in your car, you will probably get a DWI if you are acting stoned. However, there is no test for being under the influence of marijuana and therefore if you act normal its very hard to prove. Beware that cops are more likely to hassle you in a vehicle than when you are walking around with them, so keep it in the trunk.

Warning: If you find yourself in a legal situation, I suggest you do not rely on me or Daviswiki, neither of which takes any responsibility for you. If you are charged with a crime, find yourself a lawyer.

* California prop. 215 Legalized medical Marijuana, however, Federal law is not in sync with this State law. external link

You just gotta know where, and who.

A view on the topic of Cannabis

I find it both amusing and somewhat hypocritical that Davis, the supposed paragon of liberal thought and deed, forbids medical marijuana dispensaries within it's borders. They cite the conflict between state and federal law Daubert