Davis' local obligatory Carl's Jr. also happens to be paired with a Green Burrito, which is common practice in California and Arizona. According to Yahoo News, system wide there are 1,017 Carl's Jr. fast food restaurants, 223 of which are dual-branded with Green Burrito. One of the great things about combining Carl's Jr. with a Green Burrito is the ability to put salsa in your burgers or on your fries. They offer a 10% senior discount. You can get a burger there, among other things.

In early 2014 a South Davis location was opened, in the husk of the former Wendy's, which includes the long desired drive thru that the East Davis location lacks.

At least one student in 2005 believed the Davis franchise managed to be sufficiently worse than other Carl's Jr. franchises and should be avoided at all costs. He's probably graduated by now. And it is possible the management of the Davis franchise has changed in the intervening near-decade. If said student was a food science & technology major, its also possible he could be the manager of Carl's Jr. now. X-Men such as Colossus love Carl's Jr. link

Outside of the Western U.S., Carl's Jr. is named "Hardee's", and has the same menu and logo, although menu items go by different names (the "six dollar burger" is a "thickburger"). Check out the distribution of the two using Fast Food Maps or look at the map below.

Yellow is Carl's land, while Hardee's live in Red... where they both are is orange. Click to enlarge. 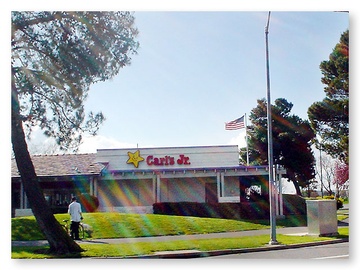 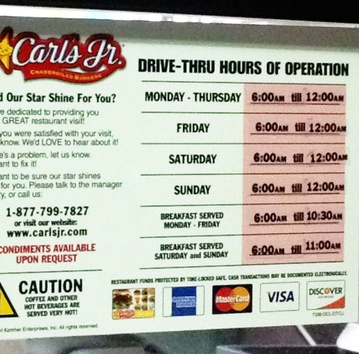 I haven't been to the Carl's Jr. in Davis, but I like their selection of carb-smart burgers. — SS

2005-05-06 20:22:36   Carl's Jr. is known as Hardee's on the East Coast. They sell the same things like the $6 Dollar Burger but breakfast menu items are heavy on biscuits rather than burritos. —CandiceBrown

2005-11-12 00:33:03   This Carls Jr. takes the cake on cleaniless and food quality. The cooks, Maricela specifically, do a fantastic job of making picture perfect burgers. There used to be a drive through for bikes at one point in time, which was since removed. Reason is speculated to be an employee breaking the window and the repair guy never replacing it. This branch of Carls Jr. is the highest ranking in the district, as well as the only one without a drive through. —TarynHornen

2005-12-08 18:00:55   The 6 dollar burgers are obscene. Childhood obesity, and early onset diabetes are a consequence of unhealthy food. You can say to each his own, but unfortunatey we as a society face the burden of cost when an epidemic of diabetes takes place and the healthcare system becomes strained. I predict a class-action lawsuit against fast food companies just like the tobacco industry faced in our lifetime —DudeNude

2006-12-14 05:09:09   I ordered a hamburger there today. I saw the person making the burger lick some extra dressing off her finger and continue to make the burger. I ate it anyway. —DanielWorthington

2007-05-12 18:20:24   I am an avid health freak, however I have searched the menu and they do have some healthier options such as salads. However, use fat free salad dressing or it will defeat the purpose. The Charbroiled BBQ Chicken Sandwich is actually pretty good tasting and doesn't have too much fat. —Jedron

2007-05-15 14:24:42   the CJ's on Covell is pretty good actually. I like how its paired with the Green Burrito menu, so you can have more choices. The one at the Silo is TRASH. not only is the menu lacking, everything is overpriced. —DonaldJaye

2007-08-04 03:36:42   Love the big burgers actually i think best around besides the squeeze inn in Sacramento that place rocks. Carls is a great place to get a good fast food burger my opinion —Brians

During one trip there, I received the wrong soda, took it back and got a new one

Then I got the wrong meal, which I also took back after opening the burger and seeing that it was not mine

As i took it back, another girl went up to ask about her food. As it turns out, I was given her order. As the server walks off to get my order, the girl opens her bag, takes out her burger, and stares at the open wrapper for 5 full seconds. Then she seemed to decide, "f**k it" and just left.

i barely contained my laughter —fredchen

Anyway, the people who have commented saying they "like the carb-smart burgers" or "use the fat-free dressing" are idiots. People who fool themselves into believing these things make fast-food healthy deserve to be fat. Please, rid the world of your stupidity by gorging yourself on food and getting all the health-related problems that come with diabetes. —Loccster

2009-05-05 09:45:10   The one on East Covell Boulevard is only good for one thing, and that is a place for students from Holmes Junior High School to hang out when they ditch class. I heard they used to chase students out a few years back (makes me feel old thinking back like this). But I figure they'd rather the business. —MasonMurray

2010-07-12 15:26:40   I live close to Carls Jr and bike here regularly. I have always had good experiences with the staff, I especially like the teriyaki burger and breakfast burger. The avocado burger is also very good. —NickSchmalenberger

2010-07-13 01:36:20   I love the Carl's Jr in North Davis. Boy do I love this place. What is it? It's just a good value for the burger, so damn tasty, attribution to the charbroiled goodness. The bike ride there is worth it, and definitely helps tone down the feeling of guilt when I engorge myself into one of their delicious Big Hamburgers, or sometimes I really like to reward myself after a week of monotonous lectures with a Teriyaki burger. Have your crisscut fries, because today, today resources are no object!

tl;dr I love this place. —davidennis

2011-04-30 18:16:42   I'm very impressed by the six dollar burgers and the skin-on fries. We just don't have good fast food burger places like that in Denmark (only McD and Burger King, and you have to go to a Cafe for a decent burger, hence the expression "only buy burgers where you can also buy a beer with it"). Unfortunately, I've usually been at Carl's jr at campus, where every other burger is cold. Does the north Davis place have that problem too? —MichaelNielsen

2011-07-29 20:26:31   Sitting inside the Covell Blvd. location looking at a sign in the window in front of which five young Asian women were sitting. A head was blocking "tofu", the last word of "Nobody ever does a high-five after eating tofu." Then a couple of them did a high-five, seemingly unconscious of the sign. —BruceHansen

When I have tofu tonight, I plan to do a high five after. -NickSchmalenberger

2014-02-09 22:06:22   Service is fast, obviously, but the sad thing is no drive thru :( The milkshakes are made with real ice cream and are delicious. The spicy chicken sandwich is a bargain. —YoungResident