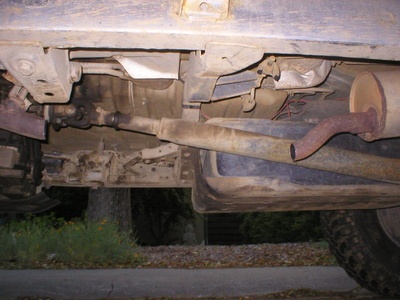 Toyota 4Runner after its catalytic converter has been stolen Yes, people steal catalytic converters. They are filled with precious metals that scrap yards give money for, ranging from around $75 to $150 each. At least 27 people had their catalytic converters stolen from their vehicles, primarily in the western part of Davis, slightly east of Highway 113, between February 26 and April 4, 2011. The thieves were targeting Toyota trucks and SUVs late at night or early in the morning. A Davis Police Department press release warned people to keep an eye out and call the police if they saw anything suspicious. On April 19, 2 guys were arrested in Cameron Park for catalytic converter thefts with a very similar MO. An employee at the Davis PD indicated over the phone on April 28 that she had not personally heard of any more catalytic converter thefts since April 19. Hopefully a call back from the watch sergeant will confirm this.

Several more Catalytic Converter thefts/tampering have occurred as of July 12 2011 recorded in police logs. It appears that on average the thefts are done in spurts; 2 or 3 on the same day spaced out every 3 or 4 days. On a humorous or horrible side, it appears even your laundry is no longer safe...reported theft out of a dryer listed that day as well.

2011-04-09 14:55:26   My catalytic converter was stolen in April 2007 on Eureka Street (close to Davis HS/Community Park). I went to start my truck up and heard a tremendous roar, I knew instantly that my cat had been stolen since there was bunch taken recently in West Sac. The replacement cost isn't nearly as high that the Davis Police say it is. I had Davis Muffler and Hitch put in a new cat and muffler for around $300. —ScottStanley

2011-07-21 16:44:16   Not a catalytic converter, but both my roommate and I had our driver side car mirrors stolen, cleanly removed, on Tuesday night 7/19/11. Parked at Anderson Court Apartments. Saw another car on Anderson Rd with a missing mirror today, it was cleanly removed too, and another car in our parking lot with the mirror pushed back the wrong way. Anyone else had this happen? What do people do with stolen mirrors anyway? Btw, mirror was not on ground or anywhere around the car, looks like someone removed it by hand. —AnthonyL

2013-03-04 11:34:21   I work for an auto accessories retailer (online only), and we sell catalytic converter anti-theft devices nationwide. We sell almost a third of them in the SF/Davis area...As mentioned above, Toyta trucks/SUVs are a huge part of those sales, though the Honda Element seems to get hit the worst. We've got stats posted here: http://www.autoaccessoriesgarage.com/Insights/Catalytic-Converter-Theft-Are-You-At-Risk —PatLundy