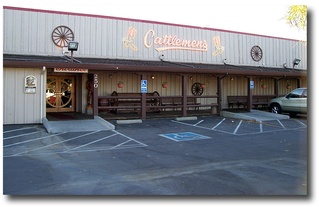 Cattlemen's is located right off of I-80. 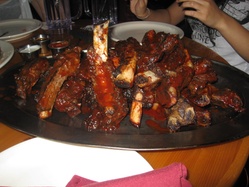 MissAmyQ: $2 Ribs EVERY Monday Night at the Bar! YUM!

With a Western theme, and portions large enough to feed the cavalry, Cattlemen's is a steakhouse that serves the biggest cuts of meat near Davis. Entrees include all you can eat salad and bread, beans, and a baked potato. They are right off I-80 over in Dixon.

They have banquet facilities, reception facilities, and can accommodate weddings, parties, and other functions. 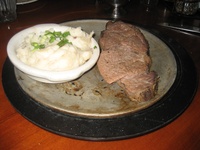 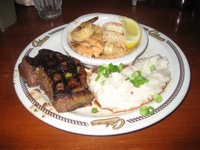 2006-07-12 16:06:06   I believe Cattlemen's is a very good steak. And I'm not alone in this belief; the Dixon cattlemen's has quite a few newspaper and magazine reviews and comparisons which consistantly place them on par with or above many of the expensive "fancy" restaurants. I recommend the Pete's special if you're not into the 24ozer: $17 or so for steak, drink (soda, beer or house wine), bottomless salad, bread, beans and the usual sides. —JaimeRaba

2006-07-14 22:37:25   Been here several times and will continue to go back. Good food, good service, tables large enough for a party and small enough for a couple, and yummy desserts. downside is that it is a tad on the expensive side. they also have a decent bar. —HollywoOd

2006-08-11 23:11:02   Their twice baked potatoes are awesome and the steak is spectacular. However, their BBQ ribs are nothing amazing. —CarlosOverstreet

2008-06-03 13:12:40   i agree with the previous entry, bbq beef ribs are all right, not exactly amazing. i went monday night for the $1/rib night and was a little disappointed. it was really backed up (i think some fraternities/sororities were having an event there) and the waitresses were completely in over their heads. there wasn't a waitress to one table, so about 6 different waitresses would come to your table asking different things. Not only that, they were all in such a hurry it was almost impossible to flag one down to clear the table, much less take an order. When my ribs came, they were room temperature, and by the time i was on my 3rd rib, they were cold. I was pretty disappointed after waiting in line for about 20 minutes behind some obnoxious people, waiting 10 more minutes to get my table cleaned, and then waiting for a waitress to take my order. maybe they were having an off night, i dont know. but that entire experience wasn't even worth the fact that I paid $5 for my meal. —juicee

2008-06-03 16:15:37   I think you were there on an off night. I've been eating at the Dixon Cattlemen's for, literally, ten years (maybe more). Every single time I've been there, the food was excellent and the service was attentive, but not overbearing. Now, there were a few times we had to wait for a table and it took a while, but that's because the place was packed (like Friday and Saturday nights). It was understandable give the circumstances. I actually prefer going when it's empty. You don't wait and since there is plenty of staff, they can't do enough for you. —CurlyGirl26

2009-11-11 11:32:01   Love it! They have plentiful seating and yet I have often waited for half an hour for a table because this place is so very popular. The prices are reasonable considering the portions and that salad, beans, and bread come standard with every meal. —GJC02

WORST STAFF ON THE PLANET!!!

While coming out of the restroom I witnessed the hostesses heckling customers as they walked by. Making fun of customer's weight, facial features, clothes and the way they talk. I filed a complaint and the manager calls me, wastes my time and tells me it didnt happen. I REALLY hate being called a liar, but wasting my cell time to insult me further. —Dozer

Enjoyed a nice diner. Staff was helpful and the food arrived fairly quick. I ordered one of the specials (Wishkey peppercorn steak) and it was delicious and just the right size for me (10 oz). I'll go back. —JulioD