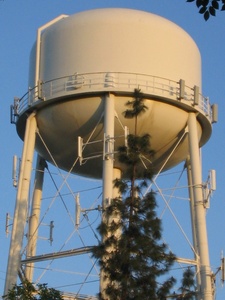 At the end of Arboretum Drive behind Solano Park

A tower near the Bulk Mail Center

Nextel has cell repeaters in the MUGA so they work underground! —StevenDaubert

Is it just me, or has a new cell tower been added on top of Kerr Hall (apparently, in late December)...