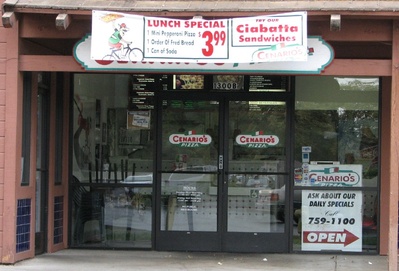 Cenario's Pizza is a regional chain pizza brand out of Vacaville and Fairfield with a location in North Davis where Rico's Pizza used to be. They also have locations at 364 Pittman Rd. inCordelia, 1955 W. Texas in Fairfield, 1490 Alamo Dr. in Vacaville, and 1160 Pitt School Rd., inDixon.

The pizza is solid, and the famed Fred Bread is rather tasty.

Cenario's runs several deals pretty much all the time; the key is to ask for the deal you're getting by name in order to get the discount. Check your junk mail for their coupons. 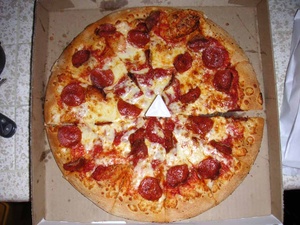 • One on One: One large single-topping pizza and a Fred Bread (essentially garlic bread) for $13.99

2005-06-08 17:16:55   I was pretty disappointed with Cenario's. Their Double Dose Deal was decidedly diminuitive. Small pizzas, flavor nothing to write home about, and price not all that low. Pass on this noise, Jack! —DanielMedinaCleghorn

2005-06-08 17:34:08   I disagree. Their larges are the same size as most larges, and larger than many Davis pizzas. And as far as pizza flavor goes, I have no fault with their sauce, crust or cheese, and I'm sort of picky about those items. I think toppings can make the biggest difference. See, it's hard to say what's wrong with a pizza unless you're a little more precise. With every pizza, there are specific things that I like and don't like. But if you look at the measurement comparison chart, you can definitely see how Cenario's compares to other Davis pizza sizes. Since all their Pizzas at Cenario's are 2-for-1, you can get their super-huge pizza (18" which is very huge), or their square pizza (12"x17"!), and it's still a good value at roughly $20. I dunno, my verdict is that Cenario's is a good balance of quality and value, at least for Davis.—JaimeRaba

2005-10-15 20:50:34   I thought that Cenario's was excellent. It was very cheap, and the Fred Bread- although the name is odd- was delicious. My friends and I polished off two large pizzas. I highly recommend this place. —MaggieBlank

- the story of the Fred Bread can be found on their website...less odd-sounding when you read the story =)

2006-02-22 18:36:36   I have a little secret... they give you the discount price without having a coupon. Most of their "discount prices" are actually just their regular, low prices. The pizza is actually really good considering how cheap it is. —ChrisMay

2006-06-15 19:43:20   Cenario's sucks. We just ordered two medium pizzas — one cheese, one pepperoni — for pick-up. We drove over to pick them up after the estimated 45 minutes(!), and they told us they were being delivered. They were finally delivered after about an hour and 10 minutes and a call from the driver who couldn't find his way from the front of Solano Park (where there's a freaking map) to our apartment, and they were both pepperoni. Not only that, but there is barely any cheese on either of them. What a ridiculous (and expensive) experience. —RoyWright

2007-03-29 20:05:36   I have always been greeted with a charming staff. They will make vegan/cheese-free pizzas if you ask; and they generally are more than happy to accomodate your order. It is true, the delivery guys have made mistakes, but if you call it in they will try to fix it! I had bacon on my vegan pizza once and they sent a delivery guy to exchange it so I didn't have to go and get it. Strongly, strongly reccomend cheeseless with fresh tomato, pineapple, and artichoke!!!! —SoizicBovard

I have always liked their pizza, but when I ordered online they said my pizza would arrive within 45 minutes. It has been over an hour, and the pizza still hasn't arrived. When I called the place, the guy said that I called during their rush service (it's now 8pm), and that it usually takes 1 hour and 45min. I told him that the website said 45 min, and he said, "yeah, it always says that." I said that maybe they should take that off then, because I felt misled, and he said he could do nothing about the website, and that the website deals are totally different from the ones at the store. He said people should call after placing their orders online anyway, just to check in. I said I would never order online again. —RG

2007-10-30 15:17:24   Do NOT order online from them and, more importantly, do NOT order from them. I ordered online and it never came, even though I received an email confirmation and anything. Prior to this, I had their pizza before (when I actually received the pizza) and it was bland, lacked flavor, and had hardly any toppings. Your best choice is just to order somewhere else. You will not impress anyone by having Cenario's delivered. —JustinBaker

2008-03-15 16:55:28   Tried this for the first time today. Someone ordered it for lunch. It was okay. For some reason they ordered a cheese pizza which, uh, why bother? I know, I know some of you love cheese only, but I like my toppings! It's all about the toppings for me. At any rate, the pizza was okay. Not bad for a cheese only pizza—in my book. I wasn't crazy about the tomato sauce, but that's something I'm particular about so. . .it's worth trying out. At some point I plan on going back and ordering a combo or something. —CurlyGirl26

2008-03-17 13:21:59   I've had no trouble ordering from them online and I think their pizza is (usually) pretty good. The problem is that they're not consistent. I've had really great service where they've delivered really quick & the food was great and then times when it's taken them about 2 hours and the food seemed undercooked. But, they're pretty cheap! —JM

2008-08-04 19:48:38   I just got off of the phone with cenario's pizza, and the phone service was horrible!! He was extremely rude, and kept putting me on hold (3 x's for 5 min intervals)and kept cutting me off. a phone order should take at the max 5 min. Any way this better be the best pizza I've ever eaten to get me out of the mood the rude phone person got me in. —onlyleo

2009-04-26 10:12:33   HORRIBLE PIZZA! The toppings were burnt, they gave me the wrong order and it took twice as long to deliver as they claimed. By the time it arrived the pizza wasnt even warm. Plus as said many times before where is the sauce? Just plain REALLY BAD PIZZA. Not to mention one of the rudest people I have ever spoken to over the phone. I WOULD NEVER RECOMMEND THIS HORRIBLE PIZZA TO ANYONE! The $1 pizza from Wal-Mart is better quality pizza. —Dozer

2009-08-15 23:47:29   This is probably the best deal in town for a pizza. Great pizza, fast delivery, even better if you go and get it yourself. It's a small establishment on Covell Blvd near the Nugget Market. If I had had a choice and not much cash, I would always order from Cenario's. —Darren22

2010-05-07 13:53:22   I had to order from here for work lunches, and I'm pretty much done with them. The pizza was fine. It's the delivery. I have had several instances of them being over an hour late. They always blame the fact that they have school lunches to deliver. They need to run their business better. If I were able to pick up the pizzas, I would use this place. I really don't have time in my schedule to wait an hour for them to deliver my pizzas. —striker

2010-09-24 20:42:25   Cenarios is great pizza and a good value for the money. Always ask about their specials—I don't like meat on pizza and the specials are rarely vegie, but they're a great deal. The crust is excellent, portions are generous and its very tasty pizza. I'm a convert from Round Table—very good but outrageously expensive. Delivery is excellent. I hope their business doesn't get hurt from that AWFUL Little Ceasars right next door—go figure!? —toriac

Embedding music on a webpage is super old school, and it was obnoxious back then too. I'm petty enough to not order from you just because of that.

2011-05-14 17:22:23   i love getting their 5.99 pepperoni pizza. Its really good. Its definately worth paying an extra dollar for this pizza instead of the pizza at little caesars. —rachealgalante

2014-10-21 21:05:01   Decide to try this place out since it seems like they haven't had a review in years. That should have been my indication. Nothing has changed. Their pizza is bland and made from low quality ingredients—chewy chicken, artichoke that tasted like it was from a can, etc. The service was OK. They delivered in about an hour as they said, and it was fine talking to them on the phone, but it just wasn't very professional. Next time I will spend extra money on another place. —lunelectronique