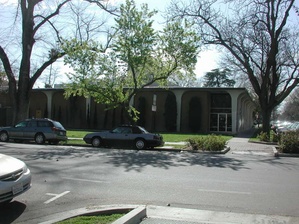 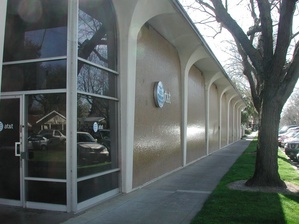 In Davis most phone lines to customers, known as local loops, go through this AT&T building on the corner of Third and C Streets. In front is a landmark Elm Tree. Even though it has the new AT&T logo, it still has red, yellow, and brown tiles that matched the old Pacific Bell red star logo.

In the traditional structure of telephone networks in the United States, as developed by AT&T and its subsidiaries, all phone cables in a small town will go to one building, called the Central Office. Internationally, these buildings are generically known as exchanges, but exchange has a more specific meaning in this context (phone systems in the USA), and many exchanges will often be in one central office. If not for the development of remote terminals, essentially very small self-contained central offices, Davis would probably have several central office buildings with its current population.

For more information on telephone exchanges see Telephone_exchange, and in the United States the http://www.thecentraloffice.com/.

For more information on telephones in Davis see Telephones.