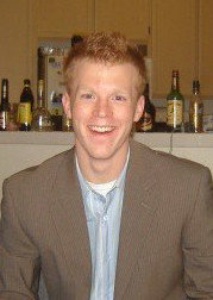 Chad Roberts is a member of the ASUCD Senate, having been elected in the Fall 2007 ASUCD Election as a member of LEAD. He is a 4th year political science major from Benicia who is currently an intern for the Conservation Strategy Group, a environmental consulting and lobbying group, and an intern for Congressmen George Miller. He is also the executive vice-president of the Interfraternity Council, president of the Order of Omega, co-chair of the Greek Conduct Board, vice-chair of the City / UCD Student Liaison Commission, co-chair of the Davis Neighbors Night Out committee, a member of the Athletic Administrative Advisory committee, a life guard at the Rec pool, and the philanthropy chair for Delta Sigma Phi. He also hearts CalPIRG. In 2008 he was named the Greek Man of the Year and was a recipient of the Chancellor's Award of Merit.

"My name is Chad Roberts and I am a fourth-year political science major running for ASUCD Senate with L.E.A.D. Currently, I’m an intern for the Conservation Strategy Group, an environmental consulting and lobbying firm, as well as an intern for United States Congressmen George Miller. On campus, I’m the executive vice-president of the Inter-fraternity Council, President of the Order of Omega honor society, vice-chair of the City/ UCD Student Liaison Commission, a member of the ASUCD Student-Police Relations Committee, a member of the Athletic Administrative Advisory Committee, a life guard at the Rec Pool, and the philanthropy chair for Delta Sigma Phi. If elected to Senate, the following is a partial list of the things I will accomplish:

First, I am going to increase and improve the current Tipsy Taxi service through the implementation of a voucher system. This system will allow Unitrans dispatchers to send either Tipsy Taxi or a local cab company to pick up students, depending on who is available at that particular time. Either way, ASUCD will pick up the bill.

Second, I am going to increase the resources that club sport teams have to draw upon. I will support them by fighting for priority registration, increased funding, and resources to pursue large sponsorships. This will allow these teams to continue competing at high levels and also help grow UC Davis' image around the country.

And finally, I will work to improve campus sustainability by replacing fluorescent and incandescent lights around campus with Compact Fluorescent Lights. This will not only help to alleviate the University’s utility deficit as these lights use 75% less energy and last ten times longer, but also demonstrate our commitment to leading the way towards a more sustainable future.

Vote for CHAD ROBERTS and the L.E.A.D. Slate for ASUCD Senate!"

2009-01-24 21:05:47   Failing horribly as a senator. Apparently, he graduated during his term and has since been rather absent. Aggie Editorial - followed by a correction of a few things stated. —EdWins