The Challenger Memorial Grove is a grove of 7 trees adjacent to the bike circle in front of the ARC. It was dedicated by the student body at UC Davis to the 7 brave astronauts who lost their lives on January 28th, 1986 when a booster rocket malfunctioned and exploded 73 seconds after launch. The Challenger flight was especially famous because it was to carry Sharon Christa McAuliffe, the first teacher to fly in space (Read more about the crew). Nobel physicist Richard Feynman was appointed to the Rogers commission to investigate the Challenger disaster and wrote extensively about his findings, a good read if you are interested.

There are other memorial groves around Campus, such as the one planned for UCD researchers and collegues who died in the Sea of Cortez in 2001 (see Memorial Grove to Honor Researchers). 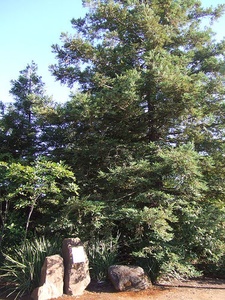 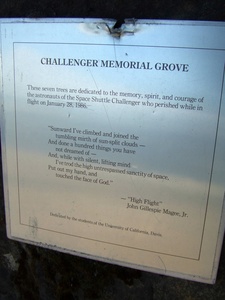