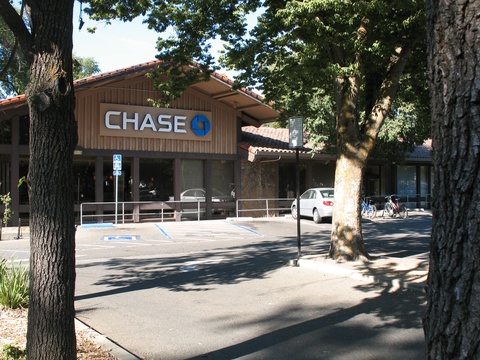 Chase is a bank with two locations in Davis. There is a branch in downtown and a newly opened branch in East Davis near Target. Both branches have two ATMs with audio capabilities for the hearing impaired. The ATM at the MU Games Area was removed after being broken for some time. The MU has a Chase ATM. There are also Chase ATMs at Davis Commons. Chase began installing Chase ATMs at CVS and Target stores in the Summer of 2009, but they are no longer Chase branded ATMs as of late 2015. Chase used to have ATMs at AMPM stores, but they are no longer Chase ATMs. Target no longer has any Chase ATMs as of July 2015.

Chase built a brand new bank branch at 4525 Fermi Place in the neighborhood near Target. This branch opened on February 28, 2012. This was the first true Chase Bank to be designed and built from the ground up by Chase in Davis.

The Chase Bank in downtown was previously a Washington Mutual. WaMu remodeled in 2007 to update their look, moving the front door from south-facing to west-facing and added an indoor ATM area accessible at all hours via card swipe. The people there are generally very friendly, if this isn't the case at all commercial banks.

WaMu was acquired by JPMorgan Chase in 2008. All California WaMu branches were rebranded to Chase in March 2009.

On March 8, 2009 all WaMu credit cards converted to Chase cards.

By mid-September 2009, the interior of the Chase bank in downtown was remodeled to look more like a traditional, but modern, bank. The banker islands common at WaMus were removed and replaced with the more familiar banking counter.

New check imaging ATMs installed by Chase in 2010 are incapable of reading red ink. The scanning system is in black and white. Checks written in red ink will be read as blank and marked as fraud. People have had their accounts closed without warning due to this. This left them unable to pay bills or access their money. News Article

Chase ATMs have a $15 dollar deposit minimum. If you do not deposit a total of at least $15 in checks and or cash, your deposit will be rejected.

At approximately 3 AM on May 22, 2011 (maybe they were thinking they had just missed Judgement Day?), two unknown men drove a truck through the front doors of the Target store in an attempt to hitch the Chase ATM machine inside to their truck. See the The Davis Enterprise article for further details. The attempt failed. This doesn't seem like the smartest crime ever because many ATM machines are equipped with ink staining capabilities. When an attempt to break into the safes inside the ATM is detected, the machine will automatically release a dye which will stain all the money inside rendering it useless. This is similar to exploding dye packs used by banks to safeguard their money. The dyed money is useless to thieves, but banks will get credited for the dyed money if it is recovered.

Fox 40 has surveillance footage of the incident.

Chase no longer has any ATMs at Target stores as of July 2015.

The End of Free Checking for Former WaMu Customers

As of February 8, 2011 there is now a $10 monthly fee for this account. Additional account fees were also added to these accounts starting February 5, 2011.

In order to avoid the monthly fee a customer must keep a minimum balance of $1,500 or have direct deposits totaling $500 or more each month (payroll, pension, or government benefit). The fee can also be waived if a customer has a balance of $5,000 or more in qualifying deposit or investment accounts linked to the checking account or if the customer has paid other Chase checking related fees of at least $25 per month.

Chase offers a Free Chase College Checking account for new customers who are students. However, this account is only good for 5 years or as long as the student is currently enrolled.

Chase Used To Have ATMs at BP AMPM stores

Chase made an agreement with BP to install Chase ATMs at BP's AMPM convenience stores in California, Washington, Arizona, Oregon and Nevada. Most of the ATMs were installed by March 2012. They no longer have any ATMs at AMPM.

Chase used to have ATMs at CVS Pharmacies in Northern California from 2009-2015. However, they are no longer branded as Chase ATMs and are no longer free for Chase customers.

2009-07-24 15:56:00   After Chase bought Wamu, a smile sort of became more expensive in this Wamu/Chase branch as well. Many of them were celebrity look-alike when they smiled (if you notice carefully, there is one Jason-Mraz look-alike....seriously..lol.). I wished they would give away more smiles now. Anyhow, the services are still high-class, except for one thing-they didn't let me use colorful pens....JK. —superdavis

2009-10-25 09:54:01   Quite a downgrade on the online-banking interface front. And furthermore, I can't tell how my checking account is now classified so that I know if they're charging fees that WaMu never charged (Free Classic Checking classification isn't on their fee schedule). Lame. Guess talking to a CSR is in my future. —RyanMikulovsky

2009-10-26 13:02:25   The reward point program is worse in multiple ways now, in comparison to WaMu. They automatically transferred the WAMU rewards into the flexibility points or whatever Chase calls it. WAMU would give you a 1% reward back. Chase gives less unless you wait on cashing it in... '3500' points is only 25.00 dollars! You don't get the even ratio back unless you spend at least '10,000' points (for $100). Points also expire after a few years, so if you're not a big credit user or you're a student, you get less benefit from Chase than you did under WAMU's "same plan". Pretty crafty on Chase's part, as it definitely encourages credit over cash payments, which is also probably a bit detrimental to some businesses and riskier for many students. —EdWins

— I called the phone number on the back of my WaMu card and I asked them to change my card into a Chase Freedom card. It only took a few minutes, and now I get 1% cash back on all purchases. Everything else stays the same including the APR and card number. You can switch to any other Chase rewards credit card if you ask. They have quite a few to choose from. —MaxLucas

2010-06-02 19:10:16   I have moved my money out of Chase. Chase is just another mega-corporation that only cares about profit. The interest rate on my savings account was reduced to an extremely low amount. I was getting virtually no return on my investments. I have since moved to a credit union(Alliant). My new credit union pays me much more money than Chase ever will. Chase takes the money that you deposit and makes money off of it while giving practically nothing back. They pocket the profit and rip off their customers. This is the same case at any big bank such as Bank of America, US Bank, or Wells Fargo. Rich bank executives don't deserve your money. Switching to a credit union online was much easier than I thought, and I am glad to have taken my money out of corrupt and mismanaged banking corporations. They are not getting another cent. —MaxLucas

2010-07-20 21:38:50   As of tomorrow, I will be moving my money from this bank. Not because of the fees (you get those everywhere) and not because of the online banking, which is sub-par, but because for the SECOND time they deposited my check into SOMEONE ELSE'S account. And the banker blamed ME for not writing my account number clearly on the deposit slip (even though I swiped my card for both transactions), which she said I could avoid if I skipped the teller and put the checks into the ATM. Great, if the ATM would actually accept my paychecks. Not worth the over $1000 I've incurred in fees and feeling like a child whenever I have a complaint. They have proven that they are not responsible with MY money, and have an extremely slow turnaround time for fixing their mistakes. Thanks Teller Dave, for once again screwing over my credit. —DaniD

2010-11-06 17:16:37   I am moving my checking account because Chase put a hold on part of my paycheck because I was a new account holder. They did not tell me they were putting a 10 day hold so I was set up to have my checks bounce. I have been depositing my paycheck there for three months when they all of a sudden started this process. This is not the right way to treat your customers. Plenty of other banks to go with. —jakedavis

2010-11-06 17:28:14   I've been using WaMu/Chase for more than 10 years and haven't had any problems personally, but I've heard enough bad anecdotes that I wouldn't particularly recommend it to others. The interest rates in savings accounts suck horribly, too. I think it's around a quarter of one percent annually. I'm sure I'll shop around for something else eventually, but it's just not that high a priority right now. —TomGarberson

2011-02-22 19:07:41   I am so angry with myself for trusting a bank, but I did and lesson learned. I opened an account with Chase when my mom had passed away and leFt me a little money. I was greeted with open arms and they were more then happy to take my money and blah blah. I chose Chase bank because my son's dad uses chase and I thought this way I wouldnt have to pay chase 7.00 everytime I cashed the chidsupport check. I used online banking because I was informed it was free.. Free my a#$. I had checking and savings linked so if by chance I ran low on fund in the checking they would not apply the overdraft fees. WRONG. To make a long story short, I was being charged 10 everytime I would transfer from sav to cking??? thought it was free?? Wehn I would go into the bank I would be greeted by the young man whom opened my account and other chase employees. To make a long story short. I had ran into some problems and unfortuntally due to the charges that i didnt expect and such my account became over drawn $88. Dollars. I emailed chase online and explained what the problem was. Thinking that it was a okay. Boy was I wrong two days ago I went in to the bank to pay off my charged off account and much to my suprise. It cost me over 400. to close the accounts and I was charged 7.00 each for two checks that I was cashing and since one was 2000.00 they wanted two forms of ID.WHAT? I WAS A FORMER CUSTOMER DAH, AND the young man that opened my account, he would not sign the checks so I had to scramble and find my debit card from another instution. I could not believe that they were so rude, and since I didnt have my money in there bank any longer they treated me like crap. I hope that they young man that sits against the back wall in the corner, will not treat another customer in such a horrible way that he did me the other day.

CHASE IS A TOTAL RIP OFF DO NOT OPEN AN ACCOUNT THERE. WITH THE EXTRA CHARGES THAT THEY GET AWAY WITH PAID FOR THE INTERIOR DESIGN FOR THAT BANK. —CHERYLJONAS