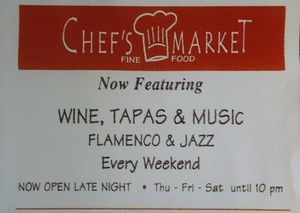 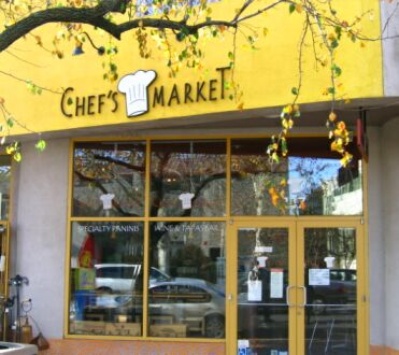 Chef's Market closed sometime in late December, and is rumored to be relocating to Sacramento.

Chef's Market sold a variety of prepared European foods. Their most popular items included panini, other Sandwiches, cheese, olives, other kind of tapas-like foods, and Wine. If you needed an event catered, they made classy variety plates.

Seating was available inside and outside, and you could listen to jazz/flamenco Fri/Sat 6pm.

Formerly located below The Lofts

2005-04-04 20:04:52   Friday night flamenco is awesome. Sean (the flamenco guy) is pretty good, and the waitresses there are obscenely hot and nice. They're pricey, but good place to bring a date or hang out with your buddies after a $6 pitcher at the Fish and Chips next door. Flamenco usually starts at 7-7:30 and goes until around 10. —DanielMedinaCleghorn

2006-01-26 18:48:50   I've tried quite a few of their salads and a couple of their sandwiches, and have yet to be disappointed. Just great, gourmet food, served counter style. Bonus: They usually have some good music playing, too! —SerenaDonovan

2006-02-19 15:14:43   I concur about the waitresses ... holy crap, I have no idea why they work in a restaurant! I went into Chef's market for the first time yesterday. I noticed the European flares from their selection of drinks. They carry Aranciata and Limonata, but no Oragina! What's more, they have a European advertisement of Orangina. WTF, mate? They also carry one of my favorite drinks; a french lemonade in a pear-shaped bottle. The only other place I've seen it is at various La Bou's. As for the prices, they're not that bad. Unfortunately, the price doesn't match the quality. My friend and I got a sandwich each and found it to be kind of meager. It was pretty tasty (I got the New York), but it reminded me of Delta of Venus's sandwiches, and if I had my pick I'd go there instead. Also, you could tell that the restaurant was kind of under independent ownership, because the person in question only had two people working the entire place (when it was relatively busy), and they were nice people, but not that attentive. —SS

2006-04-02 18:49:40   I went here last night with a few Davis friends and we all loved it. The place was almost completely empty, save for us and the live musicians. I'd recommend their "El Greco" panini: grilled mushrooms, sprouts and tomato. Yum! —StacieTownsend

2006-05-11 14:34:07   Sorry Folks! My experience was very disappointing. In my quest for a Caesar salad, I thought this would be a refreshing find. Unfortunately I paid almost $11 for wilted lettuce, processed chicken and average dressing from a plastic jug. Maybe the servers were hot, and nice, but they were much more interested in their gossip of the day than in making my salad. Chef's Market has potential, but in this case, it did not deliver. —StephanieLj

2006-08-06 12:21:58   We wanted to go here for some tapas for a friend's going away party. When we got there, they were closing two hours early. Irritating. I have eaten lunch here a few times over the years, and the sandwiches have been okay. —MisterProfessor

2006-09-04 16:16:03   This restaurant looked interesting, so I decided to try it. I first tried a beef pastrami sandwich with Swiss, but the meat was very bland. Next, I tried a "New York" which was beef and gorgonzola with lettuce, and it was pretty good (it's the cheese) except when grilled, the bread becomes hard and the soft contents squish out when you bite the sandwich. They have a good selection of cheeses, and sometimes people come in to stare at them, and the manager will also show you the wines on the back wall if you ask. However, he has a bad temper and when customers aren't looking, he throws things at his employees. My mother also tried a turkey pastrami sandwich (out of beef pastrami) and she was disappointed in the flavor of the meat. Maybe I'm just particular about my sandwich meat, but they seriously need to get some better pastrami, and some sauerkraut so you could get a pastrami Reuben. Germany is in Europe, you know - let's have a little less Franco-Italiano-centrism (with English cheese) in sandwich shops, ok? Their bread is locally-baked, however. —KarlMogel

- Diego Wilk is the owner/manager of Chef's Market.

2006-10-25 22:18:34   Definitely like their sandwiches and salads. The grilled tomoato and mozarella panini is quite good although I think the cheese could be a little better. The biggest complaint I have about this place is that they do not have high chairs so it is very complicated to eat there with my 1.5 year old. It seems like it would be only a minimal effort for them to have one or two high chairs around. We have suggested this many times to the staff but to no avail. —JonathanEisen

2006-10-31 23:42:15   Have been there several times in the last year or so. My wife and I love it. Their specialty are the European-style sandwiches or ‘paninis’, and compared to many other similar places I have been, they are exceptional. I don’t know any other place in Davis or surroundings were you can eat a ‘New York’ or ‘Siciliano’ (if you are into vegetarian-style paninis) the way they are prepared there. They have some unique creations (from the owner/chef), and had recently add new styles. The place is somewhat small, but has a very inviting atmosphere and is attentively served by the owner and his staff. Prices are very reasonable for the quality and uniqueness of ingredients they use (imported European cheeses, salamis, artisan-style bread, etc). Bottom line, great place to grab something quick to eat for lunch or dinner, and if you want to take your time, they also have some fun live music on weekends. Trying their ‘sangria’ is also a must. Highly recommended. —RodrigoCifuentes

2006-12-27 18:09:31   Sorry to say but this fine eatery appears to have become a part of Davis' history. I spoke with an employee of a neighboring store and she said Chef's Market has gone out of business. I just called the phone number and not even an answering system picked up. I'm sorry to see it go :-( —DouglasPerera

2006-12-30 18:50:04   I don't know that they've gone out of business. The Savvy Shoppe is leaving too. There's a landlord issue going on, according to the owner of Savvy Shoppe. I couldn't get intimate details. —JeffSpeckles

2007-01-11 13:33:18   Something to do with sublets and leases, seems like the lower area of the lofts has become a ghost town. Too bad while the service was slow the sandwiches were really good. At least the ones I got a chance to try were —JarrettNoble