Chi Omega (ΧΩ) is the largest women's fraternal organization in the National Panhellenic Conference with 300,000 total initiates and 170 active collegiate chapters. It is also the largest women's organization, even larger than the Girl Scouts of America and first national greek-lettered society for women. Some famous alumnae include: Harper Lee (author of To Kill a Mockingbird), Lucy Liu (actress), and Susan J. Helms (NASA astronaut). A full list of famous alumnae as well as more information on Chi Omega is included on the national website.

The Omicron Kappa chapter of Chi Omega is located on the corner of A Street and Russell at 440 A Street. Some notable charities that Chi Omega sponsors includes: Make a Wish Foundation, Susan G. Komen Breast Cancer Foundation, and Cal Aggie Camp.

Chi Omega was founded on April 5th, 1895 at the University of Arkansas by Dr. Charles Richardson (an initiate of Kappa Sigma Fraternity), Ina Mae Boles, Jean Vincenheller, Jobelle Holcombe, and Alice Simonds. In 1915, Chi Omega established its executive headquarters in Lexington, Kentucky, pioneering the use of office space among all national women's fraternities, before moving to Cincinnati, Ohio in 1926. Since 1995, the Fraternity's executive headquarters has been situated on 1.5 acres in Memphis, Tennessee. The Fraternity's colors are cardinal and straw, the flower is the white carnation, and the mascot is the owl. Other symbols include the skull and crossbones. Chi Omega made the Make-a-Wish Foundation its official philanthropy in 2000.

"To live constantly above snobbery of word or deed; to place scholarship before social obligations and character before appearances; to be, in the best sense, democratic rather than 'exclusive' and lovable rather than 'popular'; to work earnestly, to speak kindly, to act sincerely, to choose thoughtfully that course which occasion and conscience demand; to be womanly always; to be discouraged never; in a word, to be loyal under any and all circumstances to my Fraternity and her highest teachings and to have her welfare ever at heart that she may be a symphony of high purpose and helpfulness in which there is no discordant note."

In 1895, the six purposes of Chi Omega were established in order to preserve and enhance the values of each member. The six purposes are friendship, high standards of personnel, sincere learning and creditable scholarship, participation in campus activities, career and personal development, and community service. 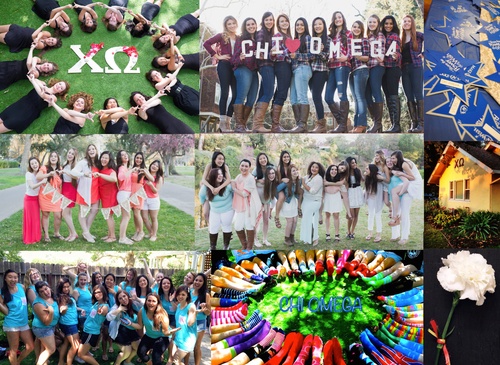