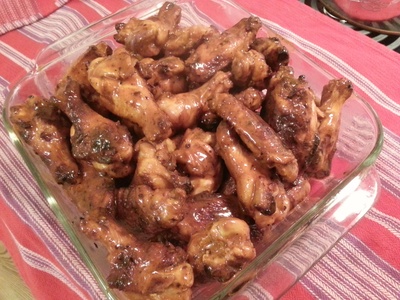 Nom. Chicken wings are often spicy, and widely loved bits of chicken fried or BBQ'd up at sordid dumps (and the occasional quality restaurant!) around the nation, you can also make them yourself. They come in many varieties, the most common being Buffalo style (commonly dubbed "hot wings", although there are plenty of other varieties of spicy wings that fit the bill) and BBQ. They're also naturally a Super Bowl staple.

Wings come in the bone-in form and boneless (which are not technically wings). Historically, chicken wings (as in the actual part of the chicken) were dirt cheap compared to the meat of the chicken, running less than 25% the cost of breast meat in the mid 1990s. By 2010, the wholesale cost of wings had jumped to 140% the price of boneless, skinless breast meat, not only causing a price inversion, but making it much more cost effective to push boneless "wings" cut out of breast meat.

The best place for getting wings that are high quality, local, and cruelty/cage free is Nugget! They offer a rocky Jr wings that are billed as "fryer wings" but are perfect for grilling. It's also entirely the first cut and not the 2nd (1st cut is basically shoulder to elbow, 2nd is elbow to hand someone correct me if I'm wrong) they make a solid base to start from when you are going to BBQ Daubert

Should you feel bad about eating chicken wings? Maybe. Check out the Ethical Eating page and decide for yourself.

Davis (and Nearby) Restaurants Serving Wings 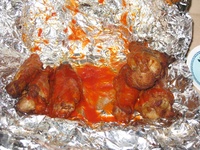 Hot wings are typically served with some celery and either ranch or bleu cheese dressing. With good wings, though, none of that is remotely necessary. Live the heat, love the heat!

* Stubbs can give sweet baby rays a run for it's money and is also pretty good * Wing-Time Buffalo sauce was created in Davis, it's good and has roughly 5 levels of spice * Everett and Jones BBQ sauce is a bay area tradition sine the 60's The yellow lid medium spice is great * Roadhouse thick & chunky can be order online (used to be able to get it at savemart) get the spicy

Have a look around for recipes. Allrecipes is a great resource with a huge number of recipes and reviews. There are some great sauces out there, and they don't have to be associated with wings. Spicy Thai and Caribbean sauces go great. You can even do teriyaki and other mild, sweet sauces. Wing purists will likely mock you for it, but that's OK. Have a little self-esteem and do it your way. Who cares what anyone else thinks? They're your wings!

Other Ways to Get Your Fix 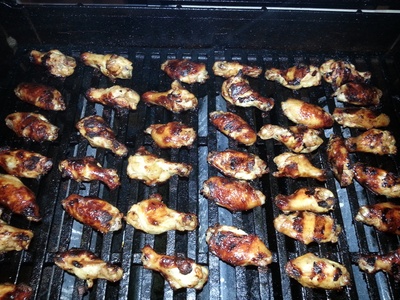 Frying is traditional, but grilling works great, too. There's a reason wings are often found at fairly basic eateries: they're easy to make. Raw wings are available any place with a butcher (except the Meat Lab, which rarely does chicken breasts, and has whole chickens once per year). They're pretty cheap - typically $2/lb. or under. You can get the whole wings and break them down yourself; you can have the butcher cut them up; or you can often find packs that are already cut into "drumettes" and "wings". If you're breaking them down yourself, you may want to discard the tips, as there's very little meat on them. The wings you get in at the store tend to have a little less meat on them than the restaurant wings. Presumably the stores simply sell a slightly lower grade of bird, as with beef.  Alternatively, the restaurants may be selling wings from larger/older birds.

2010-01-28 09:43:05   Any other wing fans out there interested in going around and sampling the wings at the various places offering them? It'd be fun to put together some reviews and rankings. And my wife has a much lower threshold for that delicious burning, so I don't think she's in. —TomGarberson

2011-06-21 19:57:32   Ding How has the best, their not on the menu. I think they still might make them, it has been awhile since i've been there, their called Sauteed chicken wings. And their killer, let me know. —Theangrydiner

2012-11-20 01:07:25   If you're in Sacramento, Wingstop is quite good, if a little greasy. It's a chain, so don't expect an immaculate dining experience. But if you're deciding to eat wings you probably don't care about that anyway. —CecilioPadilla

2013-03-04 09:37:41   Growing up in Buffalo I came to think that wings were as ubiquitous as burgers, fries and pizza. In fact every pizza place in the Buffalo/Rochester area has wings on the menu as do the bars with a kitchen. Leaving Buffalo made me appreciate how good those chicken wings were. There are places that serve pretty bad wings there but on the whole most are pretty good. Here in the Davis/Sacramento area there are fewer places to get decent wings but there is one place in Sacramento that is as close to the average Buffalo NY wing place as you’ll get anywhere called Sam’s Sub shop on Fulton Ave. They are just called wings here as they should be and come in 4 different heats and sizes from 8 to a bucket of 50. This is the norm back home. Here in Davis I will usually make my own (I’d put my sauce recipe against the best anywhere) but if I go out I go to Sudwerk. Not great but will do if I need a quick fix. —pedalpower