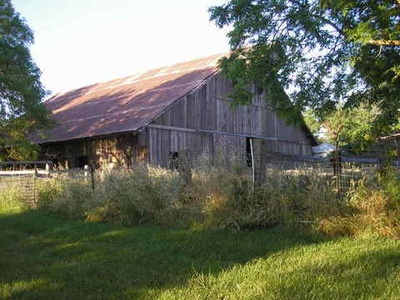 The Chiles Mansion was built in 1902 by William Dee and Clara (Calloway) Chiles, son and daughter-in-law of Isaac Skinner and Bridget (Dee) Chiles. William was born April 11, 1868 in Davis. The 15-room house was joined by a large barn and other outbuildings on the cemetery-adjacent land. At the time, a long driveway led all the way into the property from Pole Line Road.

The property remained in the Chiles family until the early 1960s, when the house and about five acres of surrounding land were purchased by Larry Z. McFarland, an anatomy professor at the School of Veterinary Medicine at UC Davis. He lived in the home with his wife, Sonia, and three children, Michael, Kenneth and Nina.

By April 7, 1972, Larry and Sonia McFarland had separated, and Larry McFarland had moved into an apartment at 1521 E. Eighth St., just a few blocks from the house. That day he flew kites with his children, and made plans to go fishing the next day with his sons and father-in-law, who lived nearby in El Macero. That night Sonia McFarland put Kenneth, 10, and Nina, 9 — both students at Birch Lane Elementary School — to bed for the night, while Michael, 14, attended his first dance at Holmes Junior High School. She picked him up from the dance at about 10:45 and returned to the Chiles Mansion at about 11 p.m.

The Davis Fire Department received a call at 11:50 p.m., reporting that the Chiles Mansion was totally engulfed in flames. The entire home was gutted before the flames were controlled and firefighters could enter. In the master bedroom, they found the charred bodies of Sonia McFarland and the three children lying face up on a bed, with the body of Larry McFarland, 41, slumped over them. Several of the bodies, including Larry McFarland's, bore gunshot wounds. An empty gasoline can was found near the front door, along with evidence that fires had been set in four or five locations downstairs.

Investigators found a two-page, eight-paragraph, handwritten note titled "last will and testament" in Larry McFarland's pickup truck, which was parked nearby. "I am taking the life of myself and my family in the belief that a family should remain together in life or in death," the note read. Other portions of the note, which had been carefully signed by McFarland on each page, designated McFarland's mother as the sole beneficiary of his estate, and stated that the bodies should be cremated and buried together in Davis Cemetery. The note was dated April 7, 1972.

After a lengthy court process, Mary Bado Simmons, the mother of Sonia McFarland and grandmother of Michael, Kenneth and Nina, won the ability to not bury their remains with "the murderer." She also won full legal rights to the property.

The house was never rebuilt. All that remained were the surrounding sidewalks, as well as barns and other outbuildings. The property's standing barn was "the last reminder of family tragedy" (Jeff Hudson, Davis Enterprise, April 2003). Mary Bado Simmons kept the entire property in an undeveloped state as a memorial to her grandchildren, son-in-law and daughter until her death in 2006 at the age of 98. Had the Chiles Mansion survived to this day, it would probably enjoy the same recognition as other Davis landmarks, such as the somewhat older Boyer House.

As East 8th Street was extended through Pole Line Road, the parcel was given the address of 2411 East 8th Street. Left in the hands of various caretakers, the property became known as Sunrise Farm by the 1990's.

These 12 acres on which the Chiles Mansion sat was then sold by Mary Bado Simmons' heirs to local developers Steve Sherman and Dan Fouts in April 2007 for $4.2 million. The builders reportedly plan to create a "green" housing development on the land. A series of "Simmons Estate Visioning Workshops" were hosted by the city of Davis in fall 2007 to discuss a design and policy plan for the land. The Big Barn was deconstructed in November 2011. Most of the remaining vegetation was cleared in December 2011. Sunrise Farm is now a large empty lot with a chain link fence blocking entry from East 8th Street.

2007-09-03 18:50:48   I guess a memorial only lasts as long as the person who establishes the memorial. Tragic that the most unique plot of land in Davis will be lost along with Mrs. Simmons. Do her heirs not care, or did she OK the release. $6 million or a memorial plot of land, how is that for a decision? I've known people who lived at Sunrise Farm, and had heard of the fire/murder/suicide, but hadn't put the two together; always wondered why this farm remained. I was contemplating the development and the loss to Davis of this unique mid-suburb plot of farmland and drove by the place on 8th Street. As if to communicate to me the magic of the land, a line of turkeys stretched across 8th Street in front of me, literally blocking my car. Can a suburban cookie-cutter development simply be built over this land, on top the location of what could have been one of the most spectacular tradgedies in the history of Davis? Will someone have their home built on the site where a mother and her three children were shot by their father and then burned in their home along with the killer? Where the old sidewalk and flags now surround the site as a memorial, will some suburban smuck live in ignorance of the tragic history that played out on his plot of land, 90% house and 10% cement backyard? I've always found those laws that require the disclosure of deaths in a house somewhat silly, but in this case, does the law apply when the house is gone and only the spot of ground is the same? I think in the case of such a spectacular family loss most homeowners would be pretty freaked out. Will the City of Davis erect a tacky memorial / site of historical interest marker in front of the suburban home that will occupy the site? Or will the site itself somehow remain preserved within the development as a memorial? Of course, that's a million dollar loss to the developers . . . so I doubt it. The turkeys crossing my path was some sort of signal that something besides complete obliteration of the memorial land is in order. Maybe the Mondovis will step in with some big dollars . . . naw, instead of saving the Palms they spent many times more on a modern, sterile, UC Facility with their name on it. It's about them, not our community or our history. Bottom line is, more and more of the true history and character of Davis is lost with each such development, and Davis becomes a little more sterile and more like every other town with a Target and a Strip Mall with a Starbucks and a Bed, Bath & Beyond. Thank you, Mary Bado Simmons, for keeping Sunrise Farm as a memorial and treasure for Davis, even if just there and out of sight and mind to 95% of residents. —AlanMiller

2007-09-04 14:30:00   The City has hired a consultant to host a "Series of Visioning Workshops" (remember the recently concluded 3rd and B Streets Visioning process?) for the Simmons Estate Concept Plan. Sept. 17-20, 2007. Contact is Planner Cathy Camacho at the City: [email protected] —ValerieVann

2009-02-18 15:58:51   This place is haunted, and not just because it is next to the cemetary! We boarded a horse there for many years, and many of the boarders had strange experiences and believed the place to be haunted. When we were there, the little girl's horse was still alive, and perhaps she was near. We experienced sightings of a figure in white, (the type of thing that you see from the corner of your eye, then when you look closely, it is gone), the sound of the heavy metal fence squeaking open when it was secured shut, as well as the generally creepy feeling of the place. One day,in broad daylight, a horse seemed to have moved from one stall to the next, simply appearing in the new stall with no human intervention. When I heard that a subdivision would be built and people would live there, those horror movies came to mind. I wouldn't live there if it were free! —ghostrider

2011-08-15 20:34:10   If I had enough money, I'd buy that land, then find every photo of the Chiles Ranch, re-create that entire compound, hang pictures of Mike, Kenny and Nina and I'd live there...because, up yours Larry McFarland! —ChrisAde

2012-08-21 02:34:25   Larry and Sonia separated, and Larry was forced to move to a nearby apartment in Davis. He was apparently devastated by this, and the murders seem to be a cold-hearted act of revenge upon his wife. —ScottMeehleib

"Revenge" to me seems to suggest that Sonia did something wrong, and she didn't. LUpton

2017-05-08 17:20:10   And now developer, Don Fouts, will desecrate this land and disregard where these precious children perished by building high density urban sprawl. The almighty ego and dollar is alive and well at Chiles Ranch. —Teacher