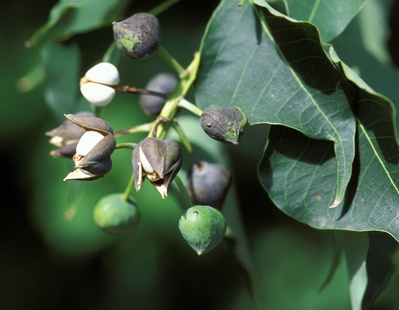 Popcorn! Do not eat!

The Chinese Tallowtree — sometimes called a "Popcorn Tree" for the white split fruit — is officially known to botany types in that wacky dead language as Sapium sebiferum. It's a deciduous tree that is a member of the Spurge family that grows well in shade and light. Like most members of the Spurge family, the sap and leaves are toxic to people and animals and can irritate skin. It is not good eats.

It's also an invasive species originating in China that loves riverbanks and moves upland from there. It can get up to 60 feet tall with a three foot trunk. The bark is light gray and splits vertically. While they don't flower (at least not visibly), they produce waxy white tri-lobed seeds that look like popcorn. And these are randy little buggers that have both male and female flowers on the same tree, putting out as many as 100,000 seeds each year and also pushing up root sprouts that grow into other trees. 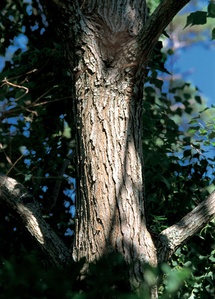 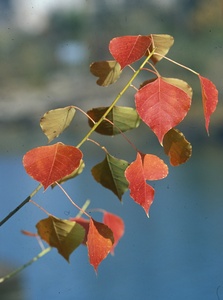 ...and the bite... or at least the shade the leaves turn if there's a cold bite in the air