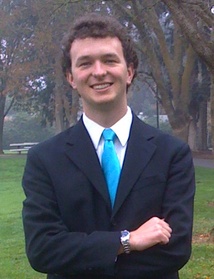 Chris Dietrich is a Davis native who was actively involved in student government during his time at UC Davis (2006-2010). He currently is a law student at UC Davis School of Law.

MISC Every time you need to get a last minute scan-tron for an exam, you can thank Senator Dietrich. Among other things, he was responsible for getting the Olson Hall Scan-tron Vending Machine installed.

My name is Joe Chatham and I am your Independent Candidate for ASUCD President with Chris Dietrich as my Vice-President. We are running because we believe Student Government is capable of making far more positive change in student lives than it has under years of “slate” control and we have a plan to do it. ASUCD is a big organization. It is the largest student employer on campus, it has a $10m annual budget, which includes units such as Unitrans, The Coffee House and the Bike Barn, it funds student projects and helps promote campus community and school spirit. Student Government is also is the voice of UC Davis undergraduates to the Administration, the Davis City Council and the State Capital. Yet most students don’t know what ASUCD is, how it operates, who runs it, or how to connect to the many resources it has to offer. This needs to change.

If Chris and I are elected, we will bring this student government to you. We will connect the student body with the opportunities and resources that we all pay $42 per quarter for ASUCD to provide. We will make sure that the student voice is heard at every possible opportunity in Mrak Hall, in the Davis City Council, and at the State Capital. We will strive to make UC Davis more sustainable and a national leader in the battle against global warming. We will fight for campus wide wireless internet, more bike parking, better entertainment and a strong connection between the student body and student government.

So vote Joe, vote Chris, and vote for your independent candidates to bring ASUCD back to the students of UC Davis. Upgrade to ASUCD 2.0 today.

Joe and Chris are both experienced ASUCD Senators and have successfully accomplished many projects including, wireless internet in Wellman Hall, getting The Green Initiative Fund on the ballot for students to vote on, connecting students to ASUCD with a box on undergraduate MyUCDavis homepages, establishing testing material vending machines and much more. For more detail on our platform and qualifications please visit http://www.votejoechris.com

CAMPUS SUSTAINABILITY - Give students the power to fund their sustainable ideas - Vote yes on The Green Initiative Fund (TGIF) to build a culture of sustainability - Prioritize solar, wind and other alternative energy on campus. - Make UCD a national leader in sustainability.

CAMPUS COMMUNITY - Work with the Entertainment Council to bring cheaper and bigger concerts to campus through external promoters. - ASUCD sponsored community BBQs in spring quarter to bring students together and liven up the campus. - Establish a student health worker program to bring more counseling options to UC Davis Students. - Foster and promote greater collaboration between ASUCD and Aggie Pack.

Hello, my name is Chris Dietrich and I am running for ASUCD Senate under the GO slate. Ever since I have come to UC Davis it has been my dream to be an ASUCD Senator. The reason for this is that I believe that through ASUCD and its $10.5 million budget there is a great opportunity to make positive changes on campus. But most students don’t even vote in the ASUCD elections and even fewer are involved in ASUCD government beyond that. This is something that I care a great deal about. I believe that students should be engaged in what is happening with their government. In addition to my passion of increasing student engagement in ASUCD politics there are a few changes that I would like to make on campus that can help make our lives as students better. The first is creating an ASUCD Housing Guide to help students in their search for an apartment by giving them student ratings of apartments, and other resources and tips to make sure their search goes smoothly. I also want to work to create a covered bike parking structure by the MU for those rainy Davis days. And lastly, I want to try to get more designated group study rooms throughout campus so people have a place to work on group projects. But these are just the beginning of what I seek to do on campus, my real passion is making ASUCD truly representative of what the students want, and I will begin that right now. If anybody reading this has any suggestions on how to improve campus life here at UC Davis I will gladly hear it, because I am here for you, the students. I promise to work tirelessly to represent the students of UC Davis and make positive changes on campus all throughout my term in office.

1. WORK TO CREATE AN ASUCD HOUSING GUIDE This guide would include student ratings of all apartments in Davis and would give other helpful tips to help students in their search for an apartment.

2. WORK TO GET A COVERED BIKE PARKING STRUCTURE BY THE MU The rainy winter weather in Davis often leads to wet bike seats for all Davis students. I will work to get a covered bike parking overhang by the MU that would help keep our bike seats and pants dry. Also, if possible I would like to see solar panels on top of this overhang to help offset campus energy costs and save the environment.

3. WORK WITH CEVS TO GET MORE DESIGNATED GROUP STUDY ROOMS ON CAMPUS When you want to work on a group project or study for a test in a group it is often quite difficult to find a place to do so on campus because of the insufficent number of group study rooms in the library. I want to work to get rooms on campus in class buildings set aside at certain times of the day for group studying and projects.

2008-02-14 19:22:14   Chris is a great candidate and is from Davis. With the departure of Molly Sundstrom should come a new ASUCD Senator from Davis. I think it's healthy but regardless, Chris is motivated and has a legitimate platform that I believe he can accomplish. —GregWebb

2008-02-15 09:42:36   For your first platform issue, I would connect with the Davis Chamber of Commerce, Tandem properties, and a couple of other large property companies about funding the guide. We had a guide in the past which featured evaluations, pictures of the rentals, and advertisements. If ASUCD were to pay for it you would have to guarantee advertising money which is really difficult and time intensive. So you best bet would be to get the above entities to make one. Bring this idea to the City-Student Liaison Commission via Steven D Lee and see if you can drum up any help. Your second one, is simple but again time consuming. You have to keep pressing the administration about it to pay for, I would start with an ASUCD resolution in support of the idea which would pressure them to approve and fund it. The third platforum issue should have been compeleted years ago. The University was suppose to build a new Student Resource Center which would feature study rooms....this was suppose to be built around the time the ARC was built. You should talk to Mark Champagne in ASUCD student services to see how far along the SRC is in being built. —JamesSchwab

2008-02-15 11:41:07   The SRC is still in the planning phase, I'm afraid. They waited so long to build it that construction costs have gone up dramatically, so it will be less than half the size it was originally intended to be. —BrentLaabs

2009-02-20 18:54:45   Has the elections committee certified the election and issued certificates of election? If not, the count is unofficial (although I don't expect it to change). —WilliamLewis

- The Elections committee certified the elections earlier and they issue certificates of election upon admission of the oath of office. -Chris

2010-02-18 23:54:57   Please leave opinion in entries. If you have a different view, add it to the entry. This isn't a dictionary or Wikipedia — there's no need to make an entry a dry compendium of facts, and it often results in leaving things out that are intrinsically part of the subject and how it interrelates to the people who are involved. You're part of the community, so feel free to add your view as well, but please respect other people's views and opinions and their ability to be presented as part of the subject as well. —Evan 'JabberWokky' Edwards

Interesting that so many people have been hit up by the crying girl eh? —StevenDaubert

2011-02-19 16:13:34   Hi Chris, IMO the info about Joe's resignation from Chipotle is interesting and important, but not necessarily in the main body of the text about Chipotle. So I moved it down to where you give more detail about the issue. —DonShor