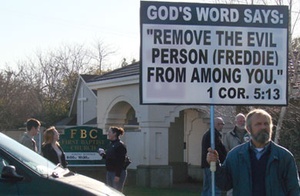 The Church of the Divide is a church in the original sense of the word: a gathering of likeminded Christians. They do not have a building and they meet in the homes of their members. In other words, they're a house church. The closest thing they have to a pastor is Dick Otterstad. Their membership is small, likely around ten members. The "pastor" revolves depending on whose house services are being held at, but the pastor is always male due to their interpretation of scripture.

They have gained notoriety in Davis for picketing in front of First Baptist Church of Davis because the pastor, Glenn Snyder, refused to publicly rebuke Freddie Oakley, the Yolo County recorder and member of FBC at the time, for issuing "Certificates of Inequality" to homosexual couples trying to get marriage licenses on Valentine's Day 2007. What really peeved them was when Pastor Snyder said that Freddie would always be welcome at the church.

Outside of Davis, the Church of the Divide has carried out many other protests. For example, they routinely protest outside Wal-Marts because of Wal-Mart's donation of $60,000 to pro-homosexual organizations. Their ministries include GaymarriageNo, Citizens for Truth in Education, and probably others. A couple people have noted that TCOTD looks and acts very similarly to the Preachers with signs.

The church and its associates have had more than a few run-ins with the law because of their activities. Members have been arrested for things like creating a public nuisance, assault and battery, and blocking traffic during their protests. 1 The church has also been known to associate with Cheryl Sullenger, who attempted to blow up a San Diego abortion clinic in 1987. 2 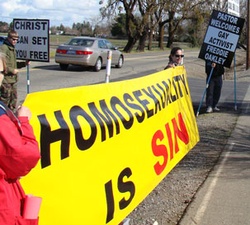 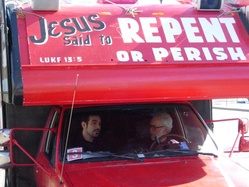 The following is Jerry Rafter's research. It should be rewritten and incorporated into the article above and the removed from this section

2007-02-27 16:31:31   The church of the divide is made up of five adults and three minor children. Dick and Luke Otterstad and Carolyn O'Connor are from Garden Valley. Todd and Beth Braun are from Auburn. The church of the divide is a umbrella for "save our slaves" "gaymarriageno" "citizens for truth in education" and a least one other that slips my mind right now. Church of the divide is not a church. It is only these handful of people and whomever they can recruit for their protests. Members of their group have been arrested for various things ranging from assault and battery 3 to blocking traffic. They associate with people like Ron Brock and Cheryl Sullenger. Ron has been arrested for several violations and Cheryl has spent about 2 1/2 years in the federal pen for conspiring to blow up an abortion clinic in southern California4 So as you can see these bible-toting idiots are not as playful as they may seem. —JerryRafter

Please try and focus comments on the Church of the Divide. General theological, free speech or gay rights arguments that do not specifically have to do with the topic of this entry are, well, off-topic.

2007-02-20 22:47:20   I saw the video file posted. It's disgusting... these people have little respect for human dignity and remind me of the Westboro Baptist Church that picketed the Episcopal Convention in Minnesota calling other Christians hurtful derogatory remarks. —CarlosOverstreet

2007-02-21 18:51:24   The video is poorly shot, these guys remind me of preachers with signs. The fact that they protest Wal-Mart also disappoints me. —SteveOstrowski

2007-02-23 10:50:46   Judging by that video on their site, First Baptist Church in Davis seems pretty hateful and intolerant of visitors coming in to worship. If they welcome Freddie Oakley, they should welcome these guys too - isn't that the loving thing to do? —DanStanford

2007-02-23 22:40:10   There's a little comment battle going on in the YouTube page for the video. Unfortunately The COTD requires "approval" of all comments before they get posted. Very confident in their stance arn't they? —JamesHaile

2007-02-24 13:27:56   They have a disclaimer that states anything sent to them becomes there property and they can post it on the site if they want to. —StevenDaubert

2007-03-04 11:58:31   http://nutritionalprograms.com/NSP_Testimonials_MorerFromClients.htm This one made me laugh out loud. Dick Otterstad is so concerned about the sanctity of gay marriage but his own marriage seems to be a failure. If you run into Dick at one of his protests on gay marriage, ask him why he lives in Garden Valley and his wife lives in Walnut Creek. —JerryRafter

2007-05-08 11:30:47   COTD is at it again, a principal in sac suspended students who were wearing shirts with the bible verse that states homosexuals go to hell. Go go principal, as those shirts are designed to intimated others, and shouldn't be allowed in the school. Also those kids are under 18 and don't have the right to free speech. The bee article briefly touched upon COTD anticts in Davis. —StevenDaubert

Brock said the message is simple: If you claim to know God, you must fight your homosexual tendencies. "Especially in our youth, we've all gone through that floundering around," Brock said. " (But) just because you have a weakness, do you give in to that weakness? "You may like it at the moment, but there are consequences." —JoshFernandez

Florin Ciuriuc was the Director of the Slavic Community Center in Sacramento. Read his quote.

for the past several years the COTD has been furnishing the Russian/Ukraine group with signs and shirts denouncing gays and lesbians. These people have been showing up, along with COTD members, at virtually every event put on by gay and lesbian organizations in the Greater Sacramneto area. —JerryRafter

2007-12-03 00:03:37   Luke Otterstad of The Church of the Divide has tabled at American River College the fall semester of 2007. Their "Christian Civilization Club" lost it's license after comments characterized as inflammatory against Muslims. See:

The controversy helped elect eight candidates campaigning for "Christian values" and against "humanistic bias" to student council seats in the fall 2007 elections. —schultkl

2008-02-16 15:26:27   For what is going on out at American River College please see http://www.savearc.com. There is a compilation of information regarding the Church of the Divide. Save ARC owes this site a very appriciative "THANK YOU" for giving us an idea of who and what these few individuals represent in our community.

It should also be reported that the ARC Inter-Club Council performed symbolic marriage ceremonies for any couple who wished to marry as a fund raiser during "Club Day" on Feb 14, 2008. It was closely observed and video recorded by at least nine supporters of the COD's philosophy. —saveARC

2008-05-24 23:42:45   Luke Otterstad from the Church of the Divide is up to the same things this semester. He has again used the picture of a trans-gender student to fan the flames of intolerance and has motivated a conservative majority to get out and vote. Luke Otterstad defends their actions before the ARC Board of Justice. See www.savearc.com for all the latest links and information. —saveARC

2012-03-21 11:38:26   I actually had to work with Luke Otterstad at the SCC school newspaper back in 2009. He seemed alright at first, but holy crap, once I found out about all this lovely stuff, I was absolutely horrified. Plus, he and his cronies in the student government stirred up a lot of controversy that same semester; I guess much like what happened at ARC. It was all very crazy, but fascinating at the same time. Luke seemed to be such a balanced and smart young man. But with all of this... the only thing I can call this and what he does is hate. I'm sure the SPLC would label this group as a hate group... —CecilioPadilla