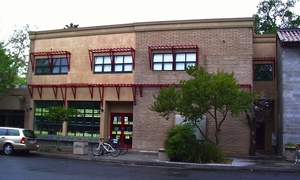 The building in 2005, now occupied by Watermelon Music

Cinema II was located at 207 E Street. At one point it and the Varsity Theatre were the two venues for movie goers.

It was a single screen theater that was long and narrow. Originally it showed mainly foreign films. There have been rumors on the wiki that it was once 2 screens, but no other information regarding that has come forth (or it was confused with the Varsity).

Closed in 1998 upon the opening of the Stadium 5 theater. Watermelon Music now occupies the same space.

What are your memories of Cinema II?

2009-06-26 22:35:32   I worked here (and the Holiday Cinema) from its 1991 re-opening til its closing in 1999. First movie ever shown was The Graduate in 1968, first movie shown after Dolby Stereo was installed was Annie, last movie shown before its first closing in 1990 was Darkman. After that its future was in limbo as there had been interest in converting the building into retail, but that fell through when a potential tenant balked at the cost of leveling the slanted floor, and Phil Harris (owner of the local theaters until he sold out to the Regal Nazis) realized that the auditoriums in his new Holiday Cinema were too small and he still needed more than 300 seats for his 'big' movies.

Robin Hood: Prince Of Thieves was the first movie shown when it re-opened on June 14, 1991. The acoustics in the theater were greatly improved, reducing the echo, and a new screen, speakers and seats were installed. Since the theater's opening the screen was at an odd aspect ratio (about 2:1) which cropped the sides off of Scope format movies, and this was not fixed in the remodel. The projection system was the same as it had been since 1979 when a platter system was installed (it previously had the old-style 2 projector system) but new amps were put in. DTS digital sound was installed in 1993 for Jurassic Park, but it was just the 2-channel matrix system which is no longer in use. Late 1994, during the last week Timecop was showing, the old Dolby CP50 processor was replaced with a newer model and the DTS unit was upgraded to the discrete 6-channel format.

Midnight movies on Friday and Saturday nights were shown here a few times, including a series in the early 80s sponsored by KZAP, then again in 1989, and once more in 1994- that final series was cut short after only 3 paying customers had shown up for The Toxic Avenger.

The screen had curtains and stage lights, but when the owners started getting greedy in late 1993 they added slide advertisements which required the curtains be kept open and the stage lights turned off. This made the theater look really drab, and I was disappointed that there were few customer complaints about it. The curtains still closed at the end of the last showing of the night, since the slides weren't going to be shown after that. During the 80s I remember some jerk would often turn up the stage lights and close the curtain during the ending credits of movies making them hard to watch; I always kept the lights down until the very end of the movie as it should be. (To be fair, the slides weren't the first instance of commercialism here- in the 80s they would show ads on 35mm from ScreenVision- I remember one that advertised cigarettes which prompted a chorus of "boos" from the audience, and another for the Intellivision video game system which I now have in my film collection.)

The last movie shown before the theater closed for good was Saving Private Ryan, which had been re-issued after its Oscar nominations. This ended up being the only movie to be shown not only at the Cinema 2, but also at the new Stadium 5 theater and at the Holiday Cinema, which had also played it during its original release a few months earlier.

The projector and sound equipment were donated by the building's owner and moved to the Varsity Theater a few months after that, but they weren't used very much until that theater went back to showing movies full-time rather than doing live theater and concerts.

During the 90s when the 6-screen Holiday Cinema and this single-screen theater were open, one projectionist had to run between both buildings to run the films. That was pretty fun and a unique part of working there, though depending on the weather it wasn't always a good thing to have to do. Since 1979 there had been a remote Start button in the box office so that the show could be started whenever the manager on duty saw fit (all the projectionist had to do was thread the film beforehand), but due to complaints about the previews being too loud we were later required to start the show from upstairs and lower the volume during the trailers. Movies at the Holiday weren't always scheduled so that we could actually do this however- a lot of times the movie here would start just 5 minutes after a movie started at the Holiday, then we would have to be back there 5 minutes later to start another one. —AlanSmithee

2011-09-06 17:03:34   I remember seeing "The Empire Strikes Back" here in 1980. Funny enough, my most outstanding memory of that night was that the floor was incredibly sticky... I guess from a large quantity of spilled sodas and/or candy, but it felt like someone had poured glue on the floor. —OldDavis73