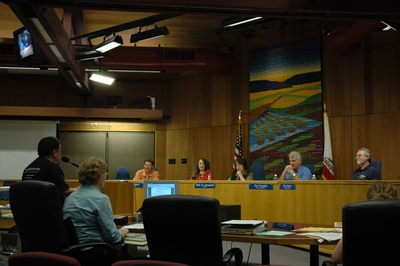 Davis is governed by a five-member council elected at-large (there are no council districts). All city departments must answer to the council, and the council directs the actions of city staff. In short, when it comes to the City of Davis, they run the show.

The mayor presides at all meetings of the city council and is the official head of the city for all ceremonial purposes; the mayor pro tempore carries out the duties of the mayor in the mayor’s absence. City Council elections are held every two years, with councilmembers being elected to four-year terms. By ordinance, the person who receives the greatest number of votes in a council election serves the first two years of his or her term as Mayor Pro Tempore and the next two years as Mayor.

The Davis City Council holds regular meetings beginning at 6:30pm on Tuesdays, except on the fifth Tuesday of any month and Tuesdays prior to a holiday. The council meets in the Community Chambers at City Hall. Meetings are televised live on the City Government Channel (Comcast channel 16) and are replayed the following Wednesday at 9am, Thursday at 7am, 1pm, 7pm, and Saturday at 1pm. Streaming video (live and archived) is available online for additional convenience.

Send an email to all City Council members.

In January 2010, a disagreement between Ruth Asmundson and Sue Greenwald escalated.

The current form of city government was decided upon in 1928. Prior to that, the town had a president and board of trustees rather than a city council and mayor.

On June 21, 1943, the Davis City Council approved a resolution supporting the mass removal of citizens of Japanese descent. They were transported to Tule Lake, California and imprisoned in a Japanese Internment camp.

City Council agendas are available at the following locations: