The City Limits of Davis:

The city limits do not include the university or most anything west of it, which is almost exclusively student housing. The net effect is that nearly half of the city's student population doesn't get to participate in city elections, exactly the way the rest of the city likes it. Students, who are poor and need a place to live, tend to be in favor of new development, whereas old residents, who own homes, tend to be in favor of driving up the scarcity of housing as much as they can in order to raise their property values.

Interestingly, although much of the University lies outside of the city of Davis, the borders of Yolo county follow Putah Creek and thus include most of the University owned land and virtually all of the developed land. The remainder south of Putah is Solano County.

Additional topics needing to be covered in this article include buffer space and the agreement with the County where the City pays to extend their control over development outside of the city limits. 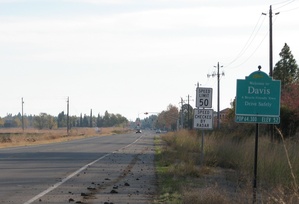 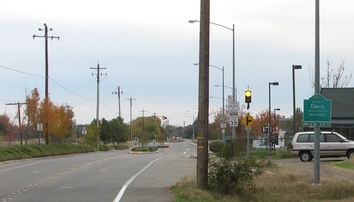 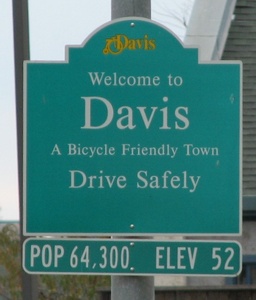 A closer look at one of the signs, November 2006