Mostly owing to the influence of UC Davis, Davis is known for its liberal political ideology. As of 2014, it was ranked as the 21st most-liberal of California's 150 largest cities, with 20,718 liberal voters and 6,447 conservative voters. [Source] Due to the presence of Davis, no Republican candidate has won the majority of Yolo County voters since Dwight D. Eisenhower in 1952, despite the fact that the county's other communities are much more conservative. In the 1984 election, a landslide victory for Ronald Reagan, Yolo County was one of only five California counties to vote for his challenger, Walter Mondale. [Source] 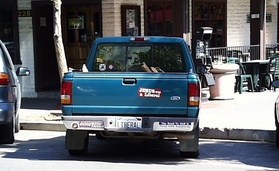 Enlarge to see license plate, taken on G Street Davis is known worldwide. Some of that characterization is seen as "progressive." Global media attention has come to Davis for such zany "Progressive" things as Toad Tunnel, issuing noise violations for Snoring, and our historic potholes. Although not as overtly as Berkeley, Davis carries the environmental torch in practical and subtle ways: Bicycles, Hydrogen and Natural Gas Buses, Environmental Research, recycling, Village Homes and Organic Living. When Julie Partansky was first running for a seat on the Davis City Council, she suggested that fruit trees should be planted throughout the city, so that homeless people could forage. Every year the Whole Earth Festival is also celebrated on Mother’s Day weekend... a self-proclaimed testament to alternative living, foods, music, and politics. Also see People's Republic of Davis.

The battle between developers and slow or no-growthers seems to keep getting more heated every election. The 2004 race where Mike Harrington was accused of taking developer money is an example. The fun part was that his accusers were rivals of the developer who allegedly gave him money. Davis politicians can be stereotyped into two archetypes, which are based on actual politicians. There are the Julie Partansky or Sue Greenwald types and the Don Saylor or Lois Wolk types. Julie and Sue (as well as Lamar Heystek) represent the progressive left: slow or no growth; sometimes renters; values similar to many hippies; while Don and Lois represent the liberal to moderate centrists of Davis, who have tended to approve new housing and commercial projects.

(A lot can be said here about the political dynamics in Davis and the relative strengths and distinctions between "progressive," "moderate," and "conservative" forces. For instance, there is a so-called "developer democrat" power structure that serves as a machine to bring people up from the school board, to the city council, to the county board of supervisors, and eventually on to the State Assembly and State Senate. Most importantly, there is a distinction between true progressiveness and a predominant veneer of progressiveness that I hope will be respected in this page as it develops. -cj ) 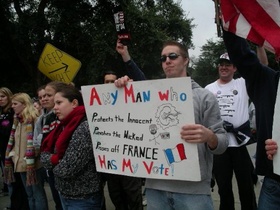 A photo from a typical Iraq-related protest Although progressive as previously stated, Davis is home to a small number of conservatives. Some of this comes from the central valley location, although a segment of student population is also conservative. Davis in recent years has become a bit of a commuter home to professionals from Sacramento and other surrounding cities, broadening the political views.

The honor guard of conservative politics is Davis College Republicans, who make some pretty daredevil political statements that everyone notices. The conflict between conservative and progressive politics leads to many protests in the city and the campus.

Local political discourse on the bathroom walls of the Campus Cafe Roma reads "And Rob Roy was a dufus! Forbes was the only progressive running! The Davis City Council has five members who each serve a four year term. They are elected at-large, two and three at a time in the primary election occurring in even-numbered years. The council meets in open session at the City Council Chambers. Council meetings often run late, and the agenda often gets rearranged at the last minute if an item is expected to garner a lot of public comment... bring a book and something to eat. Council meetings are aired on City Government Channel (Comcast Channel 16).

The mayor is selected internally by the council. Traditionally, the top vote-getter at the most recent election is chosen. The person chosen then serves two years as mayor pro-tem before taking office. Mayors in Davis do not have additional power, but run city council meetings and serve a ceremonial role at community events.

The City of Davis has about 25 task forces, commissions, and committees that are open to varying degrees of public involvement. Many of these can be applied for, and then the City Council selects the members. For important commissions, the members to be chosen can be "invited to apply" rather than being invited after applying.

Yolo County has a 5-member Board of Supervisors. Terms are two years. Davis is cut in half by the supervisorial district boundaries along L Street.

Perhaps we should include the various neighborhood associations as they deal with local politics quite frequently? —StevenDaubert