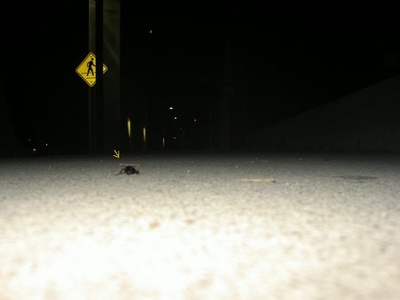 Cockroaches, or just roaches (no, not that kind!), are sweet little insects that live and flourish in the pleasant Davis weather. Like most insects, most people consider then pernicious vermin when they enter your home, and go to great measures to remove them or have them removed.

Although cockroaches are commonly associated with filthy places, like sewers and garbage heaps, and have been to proven to be capable of mechanically transporting pathogens to food (through their habit of running over your food with dirty feet, feeding on your food while defecating, and periodically vomiting), cockroaches have never been tied to any actual disease outbreaks. However, cockroach exuvia (discarded exoskeletons) have been proven to be a contributing factor to asthma and allergies, especially in young children.

And lastly, according to a study by Cochran and Ross, German cockroaches can withstand radiation between 6000 and 9000 rads, about 6 times higher than the fatal dose for humans. Unfortunately for the roaches though, modern nuclear weapons release radiation several magnitudes greater than both our tolerances. If a nuclear apocalypse rolls around, we're all screwed.

UC Davis has some great info here about how to manage roaches in your home.

Tired of roaches scurrying across your kitchen floor when you turn on the light at night? Davis cockroaches are easily controlled with duct tape and flour. Here's how. 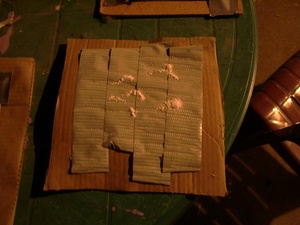 1. Get some cardboard, duct tape, and flour. You can also try cat food, but you need to monitor this so it doesn't grow maggots. 2. Get a square of cardboard, about 1 foot square. Or masonite, coroplast, anything will do. 3. Lay strips of duct tape upside down on the cardboard, overlapping on each other, then tape them down with a strip along the ends. 4. Sprinkle on roach attractant powder (optional) (flour, sugar, boric acid and roach hormone, available from Ace Hardware (called "Safer: Roach and ant killing powder), the flour and sugar tastes good, the hormone makes them think they'll get some action, and enough Boric Acid will plug up their innards). 5. Slide under your stove, under your fridge, under the washer, under the dryer, under cabinets, in the utility closet. Put them on the ground. Anywhere where you don't normally walk, and your cat or dog won't get into it. 6. Check them the next morning, see if there's some stuck roaches. 7. Dispose at your convenience, according to your own preference. It's more humane to kill the roaches before disposal. Fold the cardboard, put it in a plastic bag, and step on it a couple times before putting it in the trash.

While it's not too enchanting to have a bunch of roaches slowly dying under your stove, it sure beats the alternative. * You don't need to look at them. * You don't need strong pesticides. * It contains the dead roaches it makes cleaning easy. (With pesticides they'll just crawl into a corner a die) * It's very inexpensive. * It's not as gross as having them wandering all over your house at night... 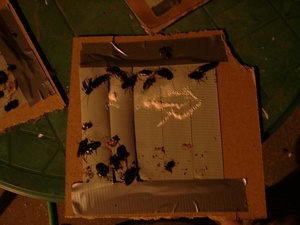 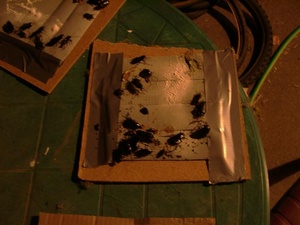 Not a pretty sight, but none of my roommates had seen a roach in the kitchen in weeks. As soon as a roach would find its way into the kitchen, it would go straight under the stove or fridge for the cat food (they didn't seem to like the powder as much) and that would be the end of that particular roach's sojourn.

1. Exterior control. The roaches seem to breed outside, then come in as adults (in my house, anyway). There's about 500 wandering around my bock on any given night, about $5 worth of duct tape and traps in pet-proof locations might solve the problem before they ever get into the house. I put a cardboard trap in the water meter sump by the street. They seem to love it in there. It filled up in one night. So I'm trying it again, and I'm going to try putting them in my and my two neighbors' sumps, too. We'll see if we can make a dent in the outside population. 2. If you have wooden structures in the backyard, like a hot-tub surround, put a trap in there, too. Under a wooden floor in a garden shed, etc. Duct tape is cheap. 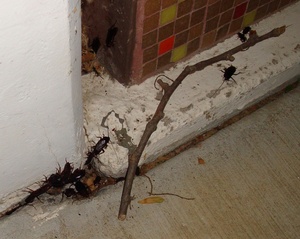 Species found in Davis include

These are probably the largest of the cockroaches in Davis, outside of the Bohart Museum of Entomology, and are distinguished by the distinctive splotch on it's pronotum, or "back". These roaches are also equipped with two pairs of leathery wings, which they rarely use, and three pairs of legs, which propel the roach at up to 3.4 miles per hour. This gives them, what is estimated by some, to be the fastest proportional landspeed of any organism, 50 body lengths each second. Although this species is called the American cockroach (or occasionally called the Palmetto bug), it is believed to have originated in Northern Africa, and traveled on ships (and other forms of human transport) around the world. They seem to prefer dark and moist environments, such as sewers. They are commonly bred and used in a similar fashion to lab rats. Such experiments tell us that not only can an American cockroach live a week without a head, but that they also apparently still maintain rudimentary learning skills without a head, thanks to the distribution of the nervous system throughout an insect's body.

These are the darker cockroaches which lack distinguishing marks on their pronoutum altogether. The females, interestingly enough, have only short stubs for wings, whereas the males have long wings. However, like the other species, they do not appear to take to the air. These cockroaches like moist places, and like the American cockroach, are fond of sewers. Also like the American cockroach, this species is believed to have originated in Africa.

​This species is of similar size to the oriental cockroach and tends to live outdoors, though they may spill into habitations if yards are significantly infested. This species is believed to have come to the US aboard military transports in the 1970s. It is currently (as of 2021) one of the most common Davis species, and has been making inroads in nearby Sacramento as well.

The smallest of the peridomestic cockroaches here in Davis, measuring in at only about 1/2 an inch in length. On their pronotum are a pair of parallel stripes. Like the American cockroach, they rarely fly and also prefer damp environments. Likewise, the common name is a misnomer, this species being believed to have originated somewhere in Africa as well. These are the cockroaches spotlighted in cockroach reproduction horror stories, since each female can produce, at highest estimate, 352 young in a single lifetime, higher than the maximum total young for other common peridomestic species. So if you see one little German roach, you can easily assume there are likely, many, many, many nearby.

There are likely other roaches to be found in Davis, as other species of cockroach are often coveted as pets, or as food for reptilian and amphibious pets. In the Bohart Museum of Entomology you can see specimens of Gromphadorhina portentosa, or the Madgascan Hissing Cockroach, a slow-moving and docile roach, which is a popular pet. Also, you may see Blaberus craniifer the Death's Head cockroach, called so because of the skull like markings on it's dorsal surface, or Blaberus giganteus, known as the Cockroach of the Divine Face. It may be one or the other...

Why are there so many cockroaches in Davis? My wife lived in Sacramento for 3 years and staying with her, I never saw a cockroach. Here it seems that there are out everywhere at night in the summer.

They are native to this area, in Sacramento there is probably a higher concentration of abatement spraying. Davis is a little more "wild" than the concrete jungle. ~SD

To be fair, most of the species we see all over Davis aren't native, though many have been naturalized for decades - the smaller fast runners that live all over the place are Turkestan roaches and they've been in NorCal since the 1970s. As of now (July 2021) cockroaches have overtaken Sacramento too. It's not quite as bad as Davis yet but we're getting there. I moved back to the same neighborhood in Sac after I spent a couple years in Davis for grad school, and the Turkestan roaches have taken over Sac neighborhoods now too (I never used to see them). Reportedly (per pest control guys posting on the Sacramento reddit) Sac has stopped abatement spraying in the sewers and/or around water mains and that has contributed. I hate roaches but their presence is probably better than pumping more poison into the environment. -Davis Gee