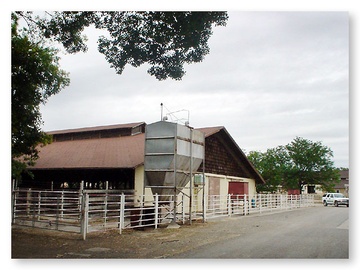 The Cole Facility is located south of Tercero near the intersection of La Rue Road and Putah Creek Lodge Road, and houses various animal labs including some small animal colonies, a horse barn, and UC Davis' Meat Lab. During Picnic Day, educational exhibits featuring one of campus' fistulated cows or allowing visitors to milk dairy animals is held here.

The Cole facility was named for faculty member Harold Harrison Cole [1897-1978], who helped establish campus as a center of excellence in reproductive physiology. Born on a farm near Marshall, Wisconsin, Cole received his baccalaureate in 1920 from the University of Wisconsin, a Masters from UC Berkeley in 1925 and a PhD from the University of Minnesota in 1928 before joining the UC Davis faculty later that year. He published his research continuously from 1930 until 1978 and his first important work, pioneered with George H. Hart, led to the discovery of Pregnant Mare Serum Gonadotropin (PMSG) which is used to superovulate females of many species. Cole served as as chair of the Animal Husbandry Department 1951 to 1960 when his leadership was noted for having the greatest impact on academic performance and department reputation. Following his retirement in 1964, the Harold H. Cole Facility for the Study of Biology of Large Animals was built and named in 1969.

To learn about creatures great and small that can be found within Davis, please take a look at our Town Wildlife.

The Little I livestock show is held here.