If you still have clothes that were being cleaned here, pick them up at College Courtesy Cleaners. 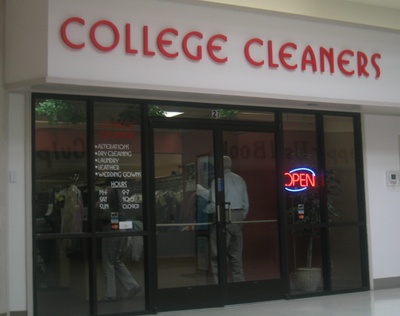 College Cleaners provides drycleaning, professional wet cleaning, pressing, tailoring, and alterations. This business is part of a family of cleaners including College Courtesy Cleaners on East Covell Boulevard as well as three cleaners in Woodland. One person seemed to recall a claim that items dropped off in the morning will be ready by the following evening. This can be very important to those who procrastinate until the very very last minute before getting their suits drycleaned.

See our Laundry & Drycleaning page for other businesses providing clothes cleaning service or check our Tailoring page for a list of other tailors within Davis.

What's been your experience with College Cleaners?

2007-01-04 09:26:39   I brought a pair of slacks and two shirts there on a Tuesday to be drycleaned. They told me that I would have them by Friday but they didn't finish in time. I was forced to go to a work conference without my suit. I'm more interested in finding a 24 hour service now. —ZakDavis

2009-01-23 01:29:08   I send my gf's dress there on Dec 28, 2008. I was told that it will be done on January 2, 2009. I went back few times and they said it has not been sent back. Finally got it back on January 22, 2009. IT WAS DESTROYED. The lady refused to compensate our lose and just said it was not their fault (she blamed the manufacture, but I asked the lady if that material is okay for drycleaning and she said yes). I don't think there is any nice people working there. They totally sucked. —Gregx

2009-02-24 18:11:18   My dress was destroyed and they still do not even try to resolve the issue. It has been two months. There is no real manager so you cannot solve the problem by "talking to the manager". How could this happen? —HonorH

I could deal with the additional expense for "green clean" but I won't deal with the ridiculously rude counter girl. Also, I work in Sacramento and make an effort to get there 10-15 minutes before closing time. I understand it can be a pain for clean-up or whatever, but I'm always very quick, in and out within 3 minutes. However, the last several times I went to drop off or pick up items they were closed 10-15 minutes early. Both times the girl was still in there, looked up when I tried the door and then waved me away. After the first time I thought maybe it was later than I realized, after the second time I complained. The third time I actually called ahead of time to make sure they would be open but by the time I got down there...she just stared at me through the glass and flicked me away. —KristinaT

I'm extremely unhappy about this place. I took my coat there a few weeks ago and it came back with one missing button. The owner said that she would fix it in a few days. I thought she would send it to alteration. When I went back a few days later, here's what she said to me: "Oh, I have a needle but I can't do anything about it because there's no button. Do you want to send it to alteration? You have to pay for it though." Why do I have to pay for the loss? Then I asked if I still had to pay the whole cost of the dry-cleaning, she replied, " Yes. You're done. You're all done". Unbelievable. I'll never be back. —YayoiW

2009-08-20 13:08:00   I had a great experience at this place. I brought in a dress than I had dropped salad dressing on (big greasy stains) and the lady behind the counter was honest with me. She told me that it would take a couple of days since it had to be sent out and that there was a reasonable chance that the stain wasn't going to come out. She took notes on what the stain was and what I had pretreated it with and gave me a quote for how much it was going to cost. When I picked it up on the day she told me to come back, it was ready, the spots were gone and she charged me exactly what she said she would. I think if you come in with a smile and be polite, it will go a long way at this place. —MicheleTobias