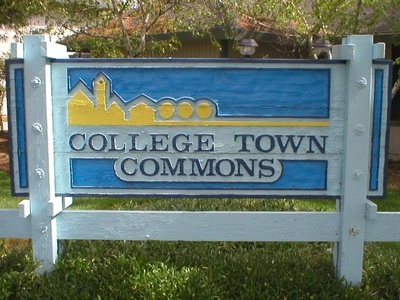 College Town Commons offers two- and three-bedroom 1.5 bath units; rental rates are not published, but there is a $200 pet deposit and wireless Internet access is included in the rental cost [March 2005]. This complex is on the Unitrans P/Q bus line.

2007-03-26 20:44:35   When the apartment vacancy rate in a town is around 5%, as it is in Davis, you’ve got to be suspicious of a complex that‘s 33% vacant. College Town Commons has 90 units and there were never fewer than 30 vacant units during the fifteen months I was there. I’m sure they have the highest vacancy rate in all of Davis. (It’s easy to see which units are empty because they keep the living room blinds open.)

I ended up at CTC because I got to Davis in November when all the better places were already rented and I had to choose from leftovers. College Town Commons is definitely leftovers. It’s 70’s vintage and poorly maintained. It looks like a Section 8 housing complex in South Sac. The vacancies are so high that they’ve been taking anyone they can get lately and some of the newest arrivals aren’t people you want living nearby. Scary.

CTC is a College Town Realty property, owned by Ching Chang and his whacked wife Lucy. Ching and Lucy are lying slimeballs and my advice is to stay far away from anything they own or manage.

Soon after I moved in I heard scratching sounds in a kitchen cupboard. I opened it and three rats were staring back at me. It took MULTIPLE calls before Ching Chang sent an exterminator. I thought they were mice but the exterminator told me they were rats from the size of their droppings. He put down traps and I caught three but there were many more scurrying around in my walls and ceiling and cupboards all winter.

The exterminator said they were coming into my apartment from a tree whose branches extended into a vent in my unit’s exterior wall. They accessed my kitchen cupboards through a gap around the stove vent. He advised trimming the tree immediately. That was in December 2005. I lost track of how many times I asked to have that tree trimmed. It didn’t happen until October 2006, nine months later.

There were several breakins during my tenancy. The laundry room door was pried open twice to get at the coin machines. (And if you leave your clothes unattended for longer than 60 seconds they will disappear.) CTC’s rental office was burglarized and their computer equipment stolen. They put new strong locks on their own door and their laundry room, but not on any of the tenant doors. CTC is near an I-80 entrance ramp making it an attractive target for burglars from Sac.

A couple months after I moved in someone tried to break into my apartment through the sliding patio door while I was at work. The fenced patios don’t have locks and anyone can walk in to your patio. They sliced my screen door with a knife but but couldn’t get through the sliding door’s lock.

I asked Ching Chang to replace or repair the screen door which was cut and bent and he never did, for almost a year. When you ask the Changs for something suddenly they no speakee English. But when I moved out it took Ching Chang exactly one day to replace that screen door and deduct the door's cost from my security deposit (along with several other illegal deductions). He’s a crook!

I have more to say but I’ll post those comments to the College Town Realty page because they’re about illegal security deposit practices common to all Ching Chang properties, and not specific to College Town Commons. —SteveGreen

I’ve left Davis but a friend there tells me that a few days after my 3/26 post here—where I wrote that 30 of 90 units at College Town Commons were vacant—you went through the complex and pulled shut the living room blinds in those vacant units, making the number of vacancies less obvious. Coincidence? I don’t think so.

Now that I know you read Daviswiki and pay attention to what I say here I’ve got a bit of advice: LOWER THE RENT!! College Town Commons is one of the dumpiest complexes in Davis; to fill up you’ll need to charge some of the lowest rents. If you don’t want the highest vacancy rate in Davis again next year reduce the rent on those 2-bedrooms from $1095 to $900. The 3-bedrooms at $1395 will need to come down to $1200.

2007-11-18 20:17:38   Where else in Davis can you get a 3 bedroom townhouse as spacious as these for $1395? We have lived here since July and found the place to be awesome. It is quiet, well located with access to shopping, bike paths and freeway access. The new manager is on top of issues very quickly and most maintenance issues are dealt with quickly. The pool is a plus in the summer as is the hot tub in the cooler months. We moved here because of the price and month to month lease flexibility. We have found it to be a family-friendly, safe and reasonably priced place to live. We have had no issues with rats or any other vermin. The common property is always kept clean and tidy with keyed access to laundry and pool. They have just reroofed four (?) of the fourplexes. There is a good ratio of students to families which provides a lot of stability but can also explain the high vacancy rates over summer. The free wireless internet is spasmodic but this is not an issue for the apartments but rather the provider, instaconnect. Overall, I'd recommend anyone to come an have a look at what this place can offer. You'll be pleasantly surprised. —davismum

2008-08-22 20:50:27   Well all I can say is I wish I has done a lot more research before we decided to live here. Do not let the free months rent deceive you. There are a long list of horrible things that go on here, just to mention a few … it is like pulling teeth to get them to repair anything and then when they do they bill you for the labor. They lose your checks and blame it on you, even when you hand it to the manager personally. Forget about you deposit, once you hand it over, just kiss it good bye, because you are never going to see it again. In addition they the manager has no common sense and she does not know the law. She tries to get first, last and a deposit before you move in. Of which is a big no, no and against the law. They are not allowed to ask for anything double the rent. They can ask for first and a deposit or last and a deposit, but not all three! Be care if they try to rewrite the contract after you sign it. We showed up one day to our signed contract taped to our door with changes?!?! Hello after a contract is signed it can only be changed if both parties agree. Please beware before you sign a contract with this complex or any other complex under College Town Realty. They will tell you they are the best in Davis, the best at taking your money. They have many, many hazards that need to be fixed!!! Oh and the maintenance guy/gal is very nosy and makes sre they nickel and dime you for everything! —MAO