some of the fields on the eastern side of the park

There is a bike overpass connecting the park to the North Davis greenbelt that crosses over Covell. The park features two play areas: Rainbow City and the Roundhouse. There are Tennis Courts, a skate park, many fields for soccer and a softball backstop with concrete stands. High school students ditching class come to the top of the softball stands known as The Ledge to smoke and skate. Possibly, they also visit to turn their backs in disdain at the skate park built by the man.

During the summer, the entire area is used by the Rainbow Summer summer camp, for kids grades K-6. This is also the case for many parks during the summer, including Arroyo and Slide Hill Park.

During the fall, if you wish to throw around a frisbee or play any other game you will have to find a spot in between the numerous soccer kids. Be polite and find a spot where you won't hit the kids! Although the park is large, it can be difficult (if not impossible) to find enough space to set up anything like a field. If you just want to toss with a friend or two, you'll probably be OK, but if you've got more than that, you may be out of luck. Of course, if you've got a whole team with you, you could probably challenge them to a rumble and win—chances are, most of you will be taller! 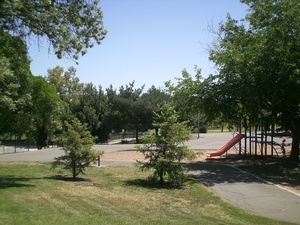 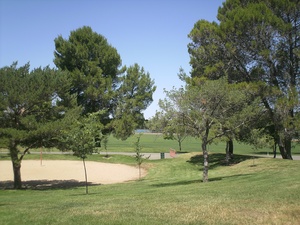 2012-11-03 01:24:34   My dad used to call that roundhouse area "Little Round Top" when dropping me off at Rainbow Summer. Sparked my interest in Civil War history, and led to many a fun time plotting how I could defend the place from the "armies" of Shade Arbor and the Solar Panels. —CecilioPadilla