The Davis Community Pool is located on 201 West 14th Street behind the Veterans Memorial Theater. It's a great place for swimming and it's open for lap swimming in the winter months from noon to 1pm Monday through Friday (that is, whenever the city's got the money to keep it open). It is run by the City of Davis, and during the summer months it would be clogged with kids from the different camps around town, like Rainbow Summer, Summer Quest, and CDC. The impending closure would be so unfortunate for the many camps immediately in the vicinity, with Community Park being basically summer camp HQ.

The city has proposed closing this pool, saying that in the current budget situation it can no longer fund four pools. As of January 2012 the pool is closed down due to budgetary constraints. It currently has a sign denoting the pool is decommissioned / unsafe for use (probably just because it is not being maintained at the moment, not that there is anything wrong with it). However, the Aquadarts Swim Team has reached an agreement with the city to keep the pool open for three months, beginning May 15, 2012; the Aquadarts will pay the city $18,000. There are no public swim hours currently planned, but during that time, AquaStarz synchronized swimmers, Summerdarts, Minidarts, Aquadarts, the AYSO World Cup soccer participants, Special Olympics and the season-ending Davis Swim Championships will all use the facility. This Enterprise article has further details.

The Davis Community Services department was contacted on May 5th, 2017 regarding this year's opening date. They reported that the pool will open during normal hours starting on May 22nd, 2017. 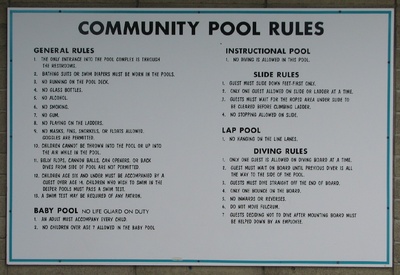 How the MAN keeps you down. 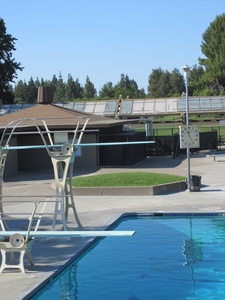 Like any city pool they don't allow gainers/inwards/reverses due to insurance reasons, smaller of the 2 main pools has always been nuts on the chlorine —StevenDaubert