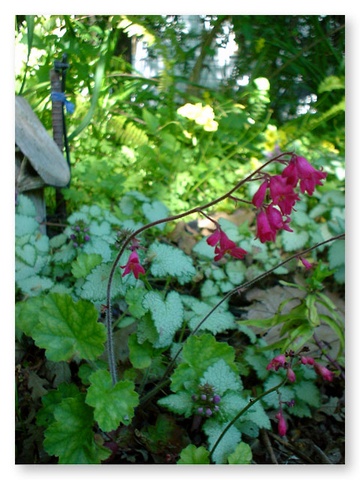 Coral Bells or Alumroot (Heuchera) are an American genus with handsome clumps of evergreen basal foliage and graceful spikes of tiny bell-like flowers on tall, thin flower stalks giving them a frothy look in late spring to late summer. Some heucheras have foliage that is red to purple and may be marked with silver; this is most pronounced during the cool months of the year and may fade somewhat in the heat of summer. The flowers are an airy cluster of bell-like flowers rising to about 24 inches. Repeat blooming can be expected throughout the summer if the old flowers are removed and plants are kept watered.

Members of the Saxifragaceae family, coral bells generally grow best in reasonably well-drained soils that are rich in organic matter. Good drainage is very critical and growth is very poor in heavy clay soils. In northern gardens and mild coastal areas, some can handle full sun; most often though, heucheras look best grown in partial shade. To help prevent mildew, space plants to allow good air circulation between them. Once established, heucheras require moderate to little watering. Heucheras usually need dividing every four or five years, when the stem becomes woody and the plant falls open at the center or flowering is reduced — the best time is in spring just before growth begins in earnest. Propagation is by division.

One of the few insect pests of heuchera is the small beetle known as the strawberry root weevil: the larvae feed underground on plant roots, eventually causing the plant's crown to die and break off at soil level. Mealybugs may also be a problem.