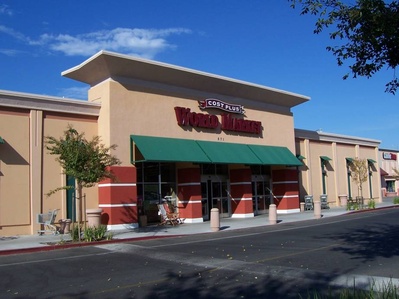 Cost Plus World Market, sometimes jokingly referred to as "Cost More Third World Market", is a chain import store in Davis. They sell many different types of wine, some of which are really cheap. They also sell ethnic food, basic furnishings, dishes, and otherwise decorative kitsch.

They are the only store in town that sells the popular papasan chairs. The only other way to get these highly-sought-after chairs in Davis is to search tirelessly through Dumpsters and garage sales.

They sell some of the spiciest hot sauces in town.

2007-06-28 15:33:44   Cost Plus is great - they have lots of fun foods, a great selection of affordable wines, and various things for the house, from plates and napkins to artwork and tables...you can pretty much find anything here - it may not be high quality, but it's interesting and relatively inexpensive. —AcMach

2008-07-01 16:57:14   I really love this place....prices are pretty cheap if you look for the deals....I bought stemless wine glasses for 1.99 while at target they were much much more per glass. I also bought a tv cabinet and a behind the couch long table...both were priced reasonably and not just look good but have had held up through some rather iffy apartment moves. Sure....a trader joe's would be lovely....but why be pissy about having a place that mainly offers furnishings! Plus...there are few things I can't find at Nugget that trader joe's offers. —sdlexie

2009-03-03 11:38:43   Fun place and always an interesting selection of delicacies and flavors from around the world. One thing they need to fix is their patronizing and entirely arbitrary attitude to IDing customers. I've seen them ID people who were probably there when California became a State and, a moment later, they don't ID someone who didn't look old enough to drive (because apparently the cashier "knew" this person). Another time they asked for my ID and the lady in front of me in the line asked why they didn't ID her: she was furious when the cashier suggested it was because she looked over 40! —Mazzle

2009-06-08 19:10:26   I hereby predict that this store will go out of business within 8 months of Target's opening in Davis. Nonetheless, this is a great place to buy basic home necessities (especially kitchen stuff) if you're too lazy to drive to Woodland. —jsogul

2010-02-22 22:02:40   world market has been having a way better beer (both singles/mix-and-match and 6-packs) selection than they did a couple years back. unfortunately they cut back on their gourmet chocolate selection though, so i don't have anywhere to get michel cluizel locally anymore. spice jars are cheap here, and occasionally they'll put out ads with coupons for $5 off $25 and send out good email offers if you're on the list (including $10 for your birthday to spend on anything). —MiranPark

2010-04-11 19:52:57   One thing this place has is a great selection of candy and sodas. Some esoterica, but if you love REAL SUGAR in your drinkables, this is the place in Davis. I haven't had Birch Beer in over a decade, and found some here. I may have actually said 'squee'. —Flynn

2010-04-12 06:57:38   I just discovered that they carry Virgil's sodas...made with stevia and xylitol. I thought it couldn't get any better than "Zevia" for my soda selection but I was wrong! Sugar free and made with sweeteners that **so far** have no known bad side effects and plenty of good ones! —OliviaY

2010-07-01 12:33:06   Love this shop, come here often for my English sweets and sauces. Staff have always been very friendly and professional - Nancy, in particular, was very helpful when I had to exchange a large item of furniture. —LizA

2011-02-16 11:46:44   I love World Market because I can find so many different food items there from different countries. I like the feel of the store as well, like the type of music they play and its an overall relaxing experience to shop there. the workers are very very kind and very helpful as well. The only issue i have are the prices, they are high, but it depends on what you are buying. Trader Joes being right next to it doesnt make it any better because they have lower prices at Trader Joes as well as international type foods. —Sandlot3

2011-03-28 19:39:16   I like the variety of different food and drinks you can get at Cost Plus (they have some especially cool different beers if you want to try something new), and I love their snacks/sweets sections because it had more than the typical chocolate bar or peanut butter cups. I've also found some cheap-but-nice kitchen/cookware here, and you can't go wrong with that. However, I tend to avoid the rugs, couches, and furniture-type things, as they are a bit expensive, and don't seem to be very high quality. —Morganna

2013-03-22 23:44:37   Has World Market started gathering birthdates when people buy alcohol? A 50+ year old family member bought wine there this week, was asked for ID(?), and the clerk manually input the birthdate into the computer(!). Has anyone else experienced this? —robinlaughlin