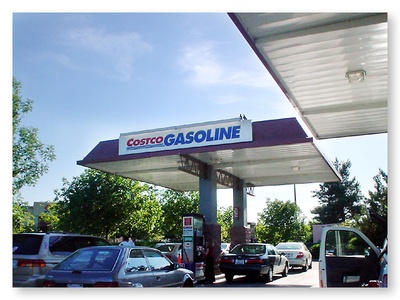 Costco Wholesale is the largest wholesale club operator in the United States (ahead of chief competitor Sam's Club). The chain opened its first warehouse in Seattle, Washington on September 15, 1983 under the name "Costco", using a similar business model to competitor (and influence) Price Club. The companies later merged in 1993 doubling the size and emerging with the name "PriceCostco"; a third name change came in 1997 to 'Costco Companies, Inc.' In 1999 the company changed its name for the final time to "Costco Wholesale Corp."; it now has locations in 37 states and Puerto Rico.

The stores themselves are large, and many products in them are large. There is no Costco in Davis; however, you can drive north to the Costco in Woodland, you can drive east to one in Sacramento, or west to one in Vacaville. Only seven miles from Davis, the Woodland location is the closest. Of the other two locations, the Vacaville one is much quicker to get to, especially when you consider the traffic near the Cal Expo exit from Interstate 80 in Sacramento. In addition, the Costco on Stockton Blvd in Sacramento is typically as busy as a cattle stampede and just as unpleasant to stand in. The Woodland location is the largest Costco ever, standing at 154,000 square feet.1

Aggie apparel can be purchased at the Woodland Costo, with royalty fees helping support athletics and other programs.

If at any point in your life it becomes necessary to have a five-gallon tub of mayonnaise or bottle of hot sauce, Costco will satisfy. Due to the large number of "bulk" items that Costco carries, households (or houses full of roommates) often split the cost of a membership to everyone's benefit. It's also great for people planning to throw a large party. Drinks, including beer, liquor, and soda, as well as chips and other snacks come in bulk at cheap prices. It's also a good place to grab a cheap lunch on weekends. They have plenty of free samples and sell a 1/4 lb. hot dog and a soda combo for $1.50 plus tax. Costco also sells gasoline at very competitive prices, though this is restricted to those with membership cards. Costco also offers an auto sales program, car insurance, and financial services.

Note: You must be a member in order to shop there, with a few exceptions: if you are purchasing alcohol or prescription drugs, or if you have a Costco gift card. By state law, alcohol and prescription drugs must be available to everyone. Inform the gatekeeper that you're only buying booze and/or drugs and they'll send you to the Membership desk for a guest pass. The second exception is gift cards. They must be purchased and recharged by a member, but may be used by anyone. Membership fees start at $50/year, and the basic membership covers the primary member plus one other person from the household (the intention is for a family member, but you may be able to add a roommate or non-marital significant other if the employee handling your membership is feeling generous). Although they accept debit cards, they do not take any credit cards besides American Express at their physical stores. Most stores' food courts are inside, and so require a membership card to gain access, but not to purchase. However, the Cal Expo Costco's food court is outside and is accessible to everyone.

For those interested in consumer psychology, Costco is an interesting place to observe.

Since the Woodland location is the closest to Davis (9.7 miles from center of Davis according to Google), it probably makes the most sense for Davis residents to shop there. Other reasonably close locations are Sacramento (19 miles away), which has the advantage of being next to REI, and Vacaville (20 miles).

Costco is a large Fortune 500 corporation that is frequently upheld as an example of moral and caring management. With some of the highest rates of pay to the lowest end employees, excellent benefits and a strong willingness to work with unions, employees are held in high regard. Promotions occur within the company, and thus lower turnover. Although Costco spends much more per employee, the loyalty garnered results in much higher efficiency and thus lower overhead. In addition, with an average employee pay rate of $17 per hour, most employees working full time, and with the CEO paying himself far under what many CEOs earn, Costco has one of the lowest differences between average salary and CEO salary. Some investors complain that the company is too good to employees, saying that Wal-Mart like profit margins could be achieved if they dropped employee benefits to Wal-Mart's levels (although Costco employees sell 50% more per square foot of store and have a 25% higher profit rate than the more comparable Wal-Mart owned Sam's Club).

Also, in the 2004 election cycle, Costco CEOs donated approximately $365,000 to Democratic candidates and entities. (Privately or as an official corporate support?)

The Costco Challenge is as follows: eat $10 worth of any food/drink combination at the Costco food court during one 1-hour sitting. Tax is not included in this calculation. Trust me, it is a challenge.

25 April 2009 — David Cookie Anderson rose to the challenge with the consumption of a whole pizza ($9.95) and a drink ($0.59), including mandatory refill. Note that Cookie went the extra mile, in that his pizza was in fact a combo style, loaded with options.

2006-12-03 17:17:06   I'd say it is theft, as you're bypassing a required membership. It's like ghosting a convention (i.e., attending a SF Con without buying a membership) and going to the dealer room. Unethical even if you're spending money, although very low on the chart IMO. Interesting that one would not consider avoiding a membership fee as a form of stealing (however mild you may think it is). What's your reasoning? —JabberWokky

2006-12-03 17:31:02   You have to show your membership card when you check out. So it's not stealing, because you can't get anything. Well, maybe it could be construed as stealing because it would incur labor costs in the form of restocking all the things a non-member tries to buy. —CarlMcCabe

2006-12-03 17:35:27   Ah, yes... well, I'd agree there. I assumed the act being discussed was actually buying items without a membership. I believe you're allowed to walk around without a membership anyway. They ask for your card when entering just to make sure that you have it and don't show up at the checkout with a load of stuff unaware of the membership requirement or having forgotten your card. I used to simply pat my pocket, nod and say "I have my card" and they always let me in. —JabberWokky

2006-12-03 17:42:15   You do not need to be a member to purchase alcohol, use the pharmacy, or go to the optometrist at Costco. Just tell them at the door if you are doing any of these activities and they will let you in. —BradLeaser

2008-04-04 16:03:31   If you plan on going to the Woodland Costco, then beware of the directions they give via their automated voice system when you call. They tell you to exit at Country Road 102 from I-5 and then go South. The directions over the phone then tell you to turn left onto Bronze Star Drive, but I believe that there is a median that blocks you from doing so and that there are also no street signs indicating it (its a brand new street). Instead, you have to turn left on the next street, Maxwell (should be the first left from the freeway). That street will automatically turn left into another street that should deliver you to the Costco parking lot with no problems. Additionally, I could not find Bronze Star Road on Google Maps. Maybe I made an error, but I imagine that the street has not been added to their database yet. Good luck! —BlairGoss

Um, anybody coming from Davis would be coming from the other direction on County Road 102 and would only have to turn right. —NickSchmalenberger

Absolutely correct for people who know what they are doing. But when you call Costco's number (the only automated resource for getting directions to the place thus far), you have to key in that you are coming from the south. The only northbound option they have is from I-5. —BlairGoss

2008-11-29 18:03:12   Since Black Friday, Costco has been handing out free Costco cookbooks to members upon entering the store. These cookbooks are pretty nice! They still had quite a few left at the Woodland Costco as of Saturday evening. —DavidGrundler