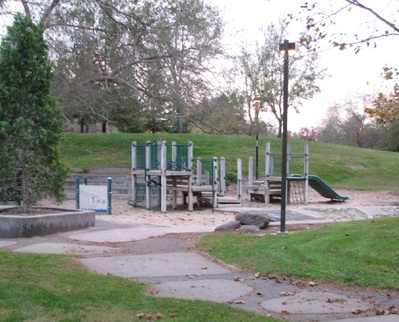 This park is situated snugly between two different housing developments. It always has at least three dogs being walked around it, as well as kids on the grass. There are two tennis courts, some play structures grounded in sand, a little seating area with logs, and a whole lot of grassy space. The backside of the park is up against a field that for some reason always has geese in it. This park's ideal for playing frisbee or catch, without fear of the place getting too crowded thanks to its hidden location. It is also perfect for studying at the top of the little grassy hill and watching everyone else. Just be wary if you have food—unleashed dogs love to come up and try to lick your unsuspecting face buried in some book, thanks to a few sandwiches and Goldfish crackers.Playground 1 on Baja Avenue was renovated in 2020.

It appears that the city's open container ordinance does not apply to this park.

The hill is referred to as the toilet bowl —StevenDaubert

2007-10-26 13:22:11   This park and the bicycle/walking paths around it are wonderful! I had a great time last night riding the paths, seeing the dog statues, and the horseshoe shaped hill. This area qualifies as one of the best public places in Davis. —MischaGushiken

2008-07-27 11:18:09   The play structure is really rickety. I heard from a parks and rec employee patrolling nearby that it's due to be replaced soon. —NoelBruening

2010-08-24 17:46:30   I assume that the replacement occurred. The new structure is somewhat interesting in that it seems like the designer's theme was "ways of hurting children that involve rotation", including the little teacup things that spin to throw you onto the wood chips, the odd ramp that lurches from side to side in order to buck you off, and the big metal and net cage that rotates freely on its axis. It can be a nauseatingly fun place to go. —JoePomidor

2010-10-12 14:42:49   This playground was replaced. It has craziest structures I've ever seen. The equipment is either unsafe or too hard to use. Who picked out these things? —NoelBruening