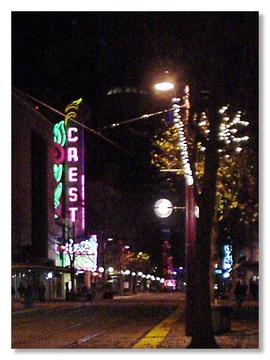 The Crest Theatre is an independent film house in Sacramento that also presents comedy shows, concerts and can be reserved for private events. The Crest provides Davis residents with an opportunity to see first run indie films. The theatre's calendar is available on their website, as is a seating chart, and Tickets.com reservations.

The Crest was constructed in 1946 within the remaining shell of vaudeville theatre originally built in 1912. Planned as a movie house, its opening night was October 6, 1949 featured "That Midnight Kiss" from MGM Studios as well as it's lead actors, Kathryn Grayson and Mario Lanza. Government officials included Governor Earl Warren and Belle Coolidge, Sacramento's first female mayor. For the next thirty years, The Crest continued to showcase films as well as concerts for such indie rockers as The Knitters, Black Flag and 7 Seconds until financial pressures forced it to close in late 1979. Local supporters banded together, including Linda McDonagh who successfully established The Palms on her farm in Davis. Together they successfully rallied to clean and reopen the venue on November 18, 1986 with the MGM musical "Singin' in the Rain" and its star, Donald O'Connor. Over the next decade, supporters worked hard to gather money and support to restore the theatre, and by 1995 the Crest received a one million dollar restoration to bring the old sparkle back to its art deco smile.

The theatre is right next to Pyramid Alehouse—a nice place to stop in before or after a show for some tasty food and beer and some of the best chicken wings in the region.

Note: Show up early to get decent seats for big events like meet-and-greets. The line is outdoors so be prepared for the heat in the summer (though it is nicely air conditioned inside).

See Movie Theaters for other theaters in Davis and the surrounding area.

What did you think of The Crest?

The outside marquee is very dramatic when lit at night. The interior is less impressive, not too much decorative flair. Their popcorn is pretty bad, I don't think its popped there. -jd

The main theater has is quite breathtaking, but they don't usually play movies in there due to its 900+ seating capacity. It is used for live shows and film festivals, but not for the regular screenings. Those are held in two small theaters in the basement that are unimpressive, although my wife did propose to me in one of them. -RogerClark