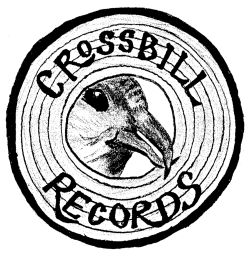 Crossbill Records is a Davis record label run by KDVS DJ Michael Leahy. The record label was born over excessive amounts of Delta of Venus coffee and cheese omelets in the summer of 2005. Its first release was Garrett Pierce's debut album, Like a Moth, in late 2005. That was followed up by a January 2006 sold-out record release show by the Mad Cow String Band at the Palms Playhouse in support of their record, Live at the Delta of Venus. In April of '06 Matt Bauer released his EP, Wasps and White Roses. This album was very well received and charted at both KDVS and WFMU. Matt Bauer now lives in Brooklyn, NY. Crossbill Records' next release was from Jake Mann, entitled, Daytime Ghost. The album was recorded in San Francisco, Davis, and Los Angeles and featured talented friends Garrett Pierce, Payam Bavafa, Andy Lentz and others. In the Fall of 2008 Crossbill put out the debut full-length CD from Sacramento Americana folk and soul group, Silver Darling. In Spring of 2009 Crossbill, released Garrett Pierce's All Masks. With plenty of miles behind it and more adventurous releases in store for the future, Crossbill has carved out a well-respected reputation in indie music circles. All of the Crossbill Records albums have received world-wide airplay and have been reviewed by countless media outlets. The artists have been fortunate to play in front of countless appreciative audiences. Crossbill artists have shared the stage with artists such as Nick Cave, The Cave Singers, Port O'Brien, Jolie Holland, Daniel Johnston, Alela Diane, Vetiver, Mariee Sioux, Damien Jurado, The Devil Makes Three, Michael Hurley, Diane Cluck and Tom Brosseau.

Crossbill artists (both past and present) and their respective releases