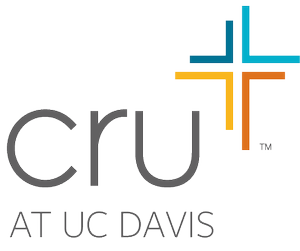 They are a caring multicultural community passionate about connecting people to Jesus through giving others a chance to hear the good news of Christ, growing in their faith, and going to every corner of UC Davis and the world.

Cru hosts and participates in a number of events throughout the year, such as barbecues, sports days, IM teams, parties, game nights, community groups, large groups, prayer meetings, and retreats/conferences. They also hold community groups in Tercero, Segundo, Cuarto and throughout Davis, in which students meet together once a week for Community Groups. . Cru hosts a fall retreat, various retreats/ conferences during winter quarter, and a spring retreat. Students often initiate spiritual conversations on the quad to get to know people on the UC Davis campus and discuss their views of Jesus Christ and God in general. The members of Cru advocate having a personal relationship with God through Jesus Christ, building up students in their faith, and training students to have spiritual conversations. Cru welcomes new people and invites everyone to their weekly meetings to see for themselves what they're all about.  Their organizational statement of faith can be found at Cru's main website.

In order to reach students of every culture, Cru partners with several ethnic student ministries. The Epic Movement is Cru's Asian-American ministry & Bridges the international student ministry of Cru. Don't confuse "Epic" with APIQ, pronounced "a pick," as commonly happens. Also, don't confuse "Cru" with "crew," or the rowing team.

Campus Crusade for Christ was started in 1951 at UCLA by Dr. Bill Bright. While an undergraduate at Fuller University, Bill Bright felt compelled to share his love of Christ with his fellow students. By the end of the 1950s Campus Crusade movements were active on 40 U.S. college campuses. In 1996, Campus Crusade was named the largest evangelical organization in the United States by USA Today. In 2003, founder Bill Bright died due to pulmonary fibrosis. Today, Cru has a ministry presence on 2,300 college campuses across the United States and in 191 countries worldwide.

To learn about other religious organizations in Davis, see Religious and Spiritual Organizations.