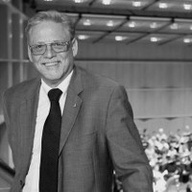 D. Kern Holoman is a professor in the music department, but is better known for conducting the University Symphony Orchestra. In November of 2000, Holoman became the first incumbent for the Barbara K. Jackson Chair of Orchestral Conducting.

Holoman wrote the customized textbook for the popular GE course "Music 10" specifically for UCD students. In 1995, he won the the UC Davis Prize for Excellence in Teaching and Research. He has been quoted by some on the wiki.

Among many awards he has received is the local Harmony in Our Lives Award in 2008.

2006-10-03 14:26:06   Many sources have told me it's Dallas. I can imagine that he'd be eager to turn that into an initial. It doesn't really fit the Berlioz-loving, French-speaking, chateau-owning, orchestra-conducting persona. —JillWeinstein