View Edit
Was replaced by Chickpeas 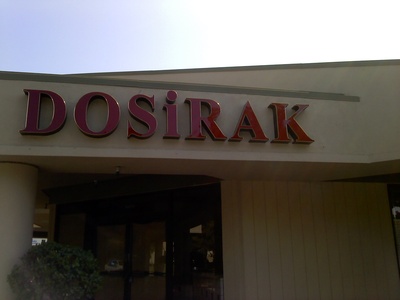 DOSiRAK is a Korean restaurant. They have rice bowls, dosiraks, gimbap (dried seaweed rolls), hot dogs, noodle dishes, salads, and ssam (wraps). It occupies the former location of a Baskin Robbins. The name of the restaurant comes from a Korean word for a boxed lunch similar to a bento. Their menu lists their ssam comes with a tortilla instead of a leaf vegetable which is what is traditionally used. There were some sockpuppets who claimed that this place is really good and better than greasy McDonald's. 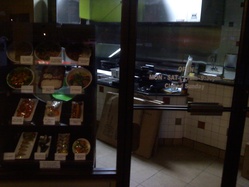 Unlike most Korean restaurants that are closed on Mondays, this one closes on Sundays. 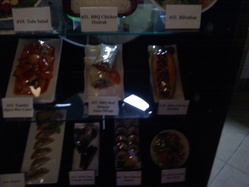 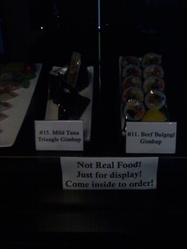 ordering at the counter

2010-09-17 12:17:23   They're open! Tried the BBQ bulgogi rice bowl and it was pretty good, but in retrospect the mac salad n mandu that come with the dosirak sounds like a way better deal. —TrishAng

2010-09-17 20:08:27   Went on opening day and the cashier was extremely incompetent. He put in the wrong entree, charged me extra, failed to apologize and a Ted like he didn't care and nothing wrong happened. The food was average and the macaroni was bad. Pricingn on wraps was also incorrect and they were missing over 5 items on their menu. They also forgot to makes my friends order on top of it all who actually spoke Korean and actually tried to fix our order mistakes. Needs fixing badly. —pieguy

2010-09-19 11:15:06   Went there; they had first-week glitches — completely excusable from my perspective. Food was good for Korean food in the States. Their Kimbap is tasty and I liked their spicy chicken sauce. I'll be trying their kimchi later today. I highly recommend that they replace the most bland and unremarkable potato salad in their Dosirak with kimchi. Then, maybe, the Dosirak options might be worth the extra cost. I think this place has good potential. I lived in S Korea for two years, and they seem to be not going too crazy with the adapting to American tastes. —RyanMikulovsky

2010-09-20 23:00:12   Went on opening day and they were experiencing some first week problems.... but the food was exceptionally tasty! the meat was tender from the bbq chicken bowl and i was feeling satisfied when i was done. My boyfriend and I went today and the place seemed much more organized and professional. The service is fast and convenient and once again the food was extremely satisifying —TritiaDaniels

2010-09-20 23:03:50   Spicy chicken sauce is very good... the beef bbq bowl was equally good as well in my opinion. Prices reasonable and they give you alot for your moneys worth. Makes great dinner and maybe lunch? Planning on going there with my friends for lunch! —graniteman221

2010-09-21 10:57:55   Their Kimchi reminded me too much of the jarred variety. Please correct me if I'm wrong, but the kimchi just doesn't smack of fresh made at the restaurant. Cabbage isn't crisp or nicely cut, there's too much liquid, etc. Fresh kimchi tends to be neat, thick, and crisp. —RyanMikulovsky

2010-09-26 16:22:51   Finally they openned!!! but i got to say it was worth the wait. The Cashier is friendly, the food was definitely worth my money, and it was reasonably quick with the food. Definitely will go there again. —ericjang

2010-09-30 16:38:11   I went yesterday for dinner with a few of my housemates. The service was friendly and efficient, but not too helpful. The ladies in the back cooked my food in a reasonable amount of time and it was a joy to watch your food being cooked right in front of your eyes. There will be crowd issues when it gets busy with the location they have the cash register set up at. Anyways, I ordered the Crunchy Chicken rice bowl, and it was pretty much Chicken katsu. It tasted good, but for $7.01 I was pretty disappointed. The amount of chicken was good, but there was really nothing but fried chicken, some strips of veggies, and a mound of undercooked rice. For 7 dollars I would have expected something more (not amount wise). I'll come again, but to try other things. My housemates' dishes looked pretty good, but they also got undercooked rice. Trying to enjoy your dinner while chewing hard rice is not pleasant. They just opened, so they're just shaking off their jitters. I think this place has much potential. —BenLee

could be cleaner, i wish they would get like a screen door or something, restaurants with doors wide open always make me paranoid because i'm BIG on cleanliness. but the people were nice, could be more proactive —emme

2010-10-16 22:22:57   We had the bibimbap and the japchae. The japchae was amazing (we loved the sweet potato glass noodles, and the dish had a wonderful flavor overall); the bibimbap was just so-so (there are better sources for this dish in Davis). We did see some other good-looking dishes go by while we were there, so we'll be trying out some of the other items. —CovertProfessor

2010-11-29 18:33:58   The vegetarian things on the menu seems to be the tofu rice bowl and tofu noodle bowl. I've had the noodle bowl (which comes with rice anyway) twice. It is consistently good, though the flavors could be a bit stronger, and it is consistently not worth the price. I want to love this little place, but just can't eat here. —IAmNewHere

2011-01-07 20:56:10   Love the atmosphere to this place. The design looks clean and fun with the neon colors—it doesn't hurt your eyes though. I got the bimbimbap but asked for it to be vegetarian. I'm not entirely sure if its vegetarian to begin with. I'm a bit foreign when it comes to Korean cuisine. Anyway, the hot sauce that comes with it wasn't too hot. It was actually quite good with the dish. The ingredients all seemed quite fresh and it had wonderful flavors. I was full and satisfied when I left but I did notice the price I paid. It almost came up to $9 and it didn't include a drink. I'll be returning to try their other vegetarian dishes. —Kenny0427

2011-02-04 18:55:47   I recommend NOT getting the japchae. It was rather bland, and the ingredients didn't really fit together. The fact that it was served with rice told me that something was wrong. An extra lump of rice was there just to make it look like you were getting more food, but instead, I think it was just their way of cutting back on giving me more japchae. —ThanhVu

2011-02-06 13:33:52   My boyfriend and I had regular kimbop and triangle one here last weekend for dinner and that's the only thing we ate together that day. After 7hours later, we starte to throw up for 6hrs and had terrible stomach flu. Dr. said we both got food poisoning!!!!!!!!!! —bambi

2011-02-25 17:08:11   Just ate there with my roommate. Have to say the food and atmosphere were excellent. I had the Chicken Crunch Gimbap (basically fried chicken sushi with teriyaki sauce on top) with a miso soup, both were great. Prices are very reasonable for the amount and quality of the food you get. I definitely recommend this place to others. —aroach12

2011-04-06 01:06:55   "Dosirak' portions are probably slightly smaller than what most people would think acceptable for the price, at least in terms of meat portions. In any case, I personally found the "dosirak" meal to be filling. The "spicy chicken dosirak", particularly, is spicy as advertised. No form of trickery here. Overall, nothing outstanding about the food or the decor. A decent choice among the paltry North Davis dining options. —blastoff

2012-02-01 15:58:38   I used to go here all the time after school. It WAS my favorite place to eat. Anyway they recently (as of 3 weeks ago) hired a new crew and NOTHING tastes the same!!! Its really disgusting. They either need to train better or start firing. Also one of the new cooks flirts with customers and its a little uncomfortable :( I'm just very disappointed with the change in food and service; it wasn't a good change. It really sucks that they don't make anything good anymore.

I would typically re-write my review after a little more time has passed with another try (especially because of there being new folks hired) but frankly the accidents have been so great and so often now that I cant even see my self going back to eat there anymore ever again! —fionatinsley

2013-04-08 21:28:17   Living a short 5 minute walk from this place I go somewhat often. Usual order is a bulgogi beef rice bowl which I love. The japchae and mandu are also really tasty. Definitely give this place a try. —RyanMeyerhoff

2014-03-18 23:44:27   I used to go to this place all the time when I lived in North Davis. The spicy pork and chicken were surprisingly good and affordable. The people who work there are really sketchy though. —RomanRivilis