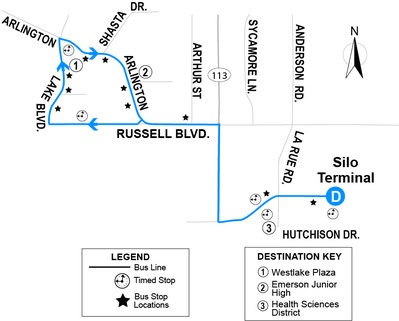 The Unitrans D Bus Line leaves from the Unitrans Hutchison Bus Terminal. It serves West Davis via Highway 113 to Russell, up Lake Blvd., and down Arlington Blvd. to make a loop.

Prior to 2007, D-MU served one union and D-Silo served the other. As of August 2013, the D Night Service follows the same route as Day Service and does not take La Rue Road to Russell Blvd.

Destinations on the D Line

Starting August 8th 2015 the D line weekend service will be replaced with the K-Line.

This is the best bus line ever. D-Line Pride! - BrentLaabs

Seriously, I hate to break it to the rest of y'all, but there's something a little bit awesome about anyone that rides the D-Line, a certain je ne sais pas... -KrisFricke

I've ridden most of the bus lines at some point or another, and I gotta say that my fave is the D line. It's by far the most beautiful and relaxing ride (West Davis, baby!), it's not too long and not too short, serves both the MU and Silo/Shields,

AND there's tons of hot guys. What more could you ask for? —KayRide