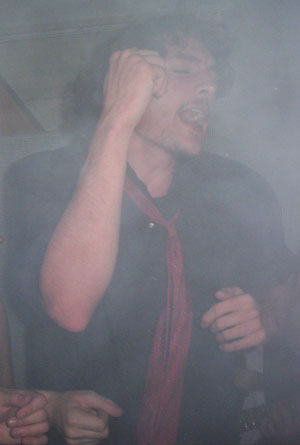 Dan Glendening was a founding ship-mate of the infamous Davis Pirate Ship, and sailed with the crew until March of 2005. He then high-tailed it for San Francisco with his degrees in Art Studio and Creative Writing clenched firmly in hand. Since his departure from the ship, the much acclaimed artist has lived in San Francisco, and currently, in Brooklyn, NY with Joe Finkel, Griffin Walker, and Jenn de la Vega.

During his time at UC Davis, he had several exhibitions, including installations at the Campus Cafe Roma and the Davis Train Station, as well as the Art Department Basement Gallery. You may have seen his work if you saw string cover the campus in the Spring of 2004.

Glendening is also a founding member of Write Club, and has participated in several readings in the Davis, Sacramento and San Francisco area alongside such heavyweights as Rob Roy, Kristen Birdsall, JoshFernandez Aisha Nouh and WillKaufman. He was a key player in the Luna's Cafe poetry scandal of 2004.

Glendening is, without a doubt, one of the most acclaimed artists and writers to emerge from Davis since the dreadfully over-rated Counting Crows.

He also used to be an Arts writer for the The California Aggie, although he doesn't like to talk about it.

He is also, at the moment, incredibly bored.