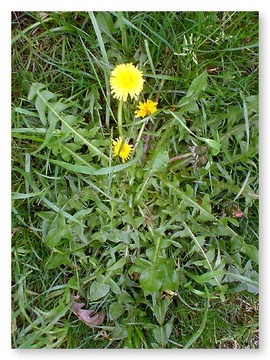 The dandelion leaf rosette is a pretty cool engineering concept.

The silvery dandelion head is mature and ready to reproduce.

Dandelion (Taraxacum officinale) considered by most a troublesome weed, is at home in all parts of northern temperate zones, growing in pastures, meadows and vacant lots. From its long tap root radiate long jagged leaves rising to form a rosette lying close to the ground; each leaf is grooved so that all the rain falling on it is conducted straight to the center of the rosette and root.

The leaves are shiny and hairless, their margins cut into great jagged teeth like the those of a lion, a corruption of the French, "Dent de Lion." The purplish flower stalks rise straight from the root, are leafless, smooth and hollow and bear a single bright golden yellow head of flower. Each complex bloom is made up of numerous florets. The dandelion occupies an important niche among honey-producing plants, as it furnishes considerable quantities of both pollen and nectar from early spring through falll, when the bees' harvest from fruit trees is nearly over. In fact, no less than ninety-three different kinds of insects frequent the dandelion. All parts of the plant exude a bitter, milky latex juice when broken, turning to a brown stain upon contact.

A dandelion seed preparing for take-off! The blooms are very sensitive to weather conditions, closing at sunset and on overcast days. When the whole head has matured, all the florets close up again within their green sheathing bracts and the bloom returns very much to the appearance it had in the bud. The withered, yellow petals are soon pushed off in a bunch as the head becomes a large white gossamer ball of mature seeds plumed with tufts of hair. When ripe the slightest breeze releases the dandelion seeds leaving only the bare, white disc from which they were launched.

Small birds are very fond of dandelion seeds and both pigs and goats devour the whole plant; it is also valuable food for rabbits. Humans may eat young dandelion leaves blanched in spring salads or sandwiches, the mature leaves being too bitter. Dandelion roots and flower buds, as well, can be eaten. Dandelion leaves can be dried and used in a digestive or fermented into an herbal beer while the fermented flowers make dandelion wine. Dandelion coffee is yet another use for the root, when dried and roasted.

For a listing of other plants, both edible and poisonous, growing in Davis, visit our Town Flora page.