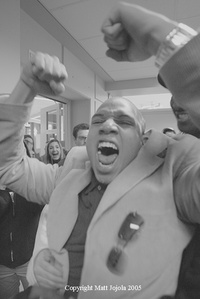 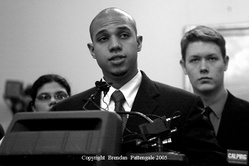 Darnell at the state capitol speaking about CalPIRG, flanked by Thomas Lloyd.

He was instrumental in ASUCD Elections Reform and the creation of the short-lived Campus Outreach and Organizing Office.

Darnell Holloway served on the ASUCD Senate (2004-2005) and is a member of the L.E.A.D. slate. Before that he served as a commissioner for the Internal Affairs Commission (03), an ASUCD senate Intern (03), a Peer Counciling Advisor for STEP Program (04), and a Community Assistant at Sterling University Vista (03-04). He is currently a member of the Fraternity Delta Sigma Phi (04-)

Darnell Holloway appeared on MTV's The Real World in Denver.

Statement of Intent to Run for ASUCD President

Throughout my time in ASUCD I have seen 42 students (including myself) elected to the senate, and I have seen 3 different ASUCD executive offices take over the association. During this time I have also witnessed four resignations, countless third floor scandals, and I have read countless Aggie editorials criticizing the association and its student leaders.

Quite frankly I am tired of ASUCD's name constantly being dragged through the mud. Based on media coverage, there is an implication that all students elected to ASUCD suffer from some sort of mass character flaw which seems to be contagious, as it has appeared to carry over from year to year. Of course we all know this is not true. However, there remains a persistent problem within the association which must be addressed. As a senator, I spent countless hours working towards reforming the electoral process, the student court, and senate meetings. While there have been notable improvements in these areas, i.e. the student court slowly but surely becoming more relevant, more efficient senate meetings, and the simplification of a once overly complex set of election guidelines, I would equate these reforms to sticking a finger in a dam to prevent a flood.

The entire system by which ASUCD operates is inherently flawed and given the constant turnover of student leadership, the system must be completely reformed to ensure continuity and to make clear the intent of questionable rules. This reform must begin with the constitutional amendment to prevent ex post facto laws from being passed. I have a vision for a better student association, and while presiding over a particular closed session in which I was the lone dissenting opinion on a very controversial matter, it became apparent to me that I am unable to achieve this vision in my capacity as Vice President.

In the past year I've worked closely with President Caliph Assagai and I have experienced both his successes and his failures. I know he wishes that the could continue for another year to ensure that we follow through with every single promise made to our constituents during the last election. However, in light of the fact that he cannot do this, I feel that it is my responsibility to step up and continue on in a new capacity as ASUCD President to carry out my vision for a better association. Given my current position, I will be able to apply what has been learned from the experiences of this past year to create a more efficient executive office and ultimately a more efficient student association. I am officially announcing my intent to run for ASUCD President with Genna Carnes as my running mate. I would like to wish all students running for office in this election the best of luck and I look forward to a spirited campaign.

Darnell is a nice person. He's helped me a lot on election reform. You might want to vote for him. - BrentLaabs

Darnell is a member of the prestigious Varsity Facebook Team - Adam