Darwin Moosavi is a former ASUCD Senator and a former Environmental Policy Analysis and Planning Major at UC Davis. He was elected in the Fall 2010 ASUCD Election running on the BOLD Slate. He previously ran for ASUCD Senate in the Winter 2010 ASUCD Election as an Independent, but withdrew his candidacy due to personal reasons prior to the beginning of balloting. He announced his intent to run again for Senate during his farewell address as the Environmental Policy and Planning Commission Chair during the 2009-2010 school year where he also hinted at the creation of the new BOLD slate, of which he was a co-founder of. He was endorsed by the California Aggie for the Fall 2010 ASUCD Election.

Darwin is credited with reducing the usage of plastic bags at the UC Davis Bookstore, creating a student menu at Gunrock Pub by the Silo, and creating a new unit in ASUCD called Aggie Restore during his term. He also advocated for the implementation of a Bike Sharing Program in Davis, which is expected to launch in 2014. He received the Michael John Tucker Leadership Award at the end of his senate term. 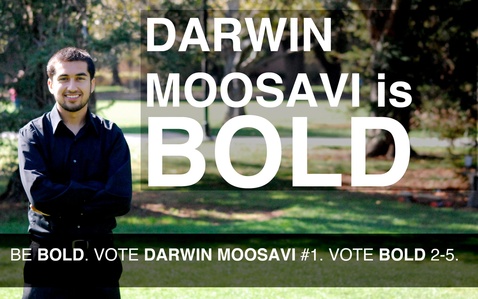 It is finally time for you to be able to claim that your student government has done something for YOU. It’s time that someone set up fiscally responsible, long lasting, holistic, feasible, and concrete goals for ASUCD. That is why we have created BOLD, a group of dedicated individuals who are here to serve UC Davis as ONE CAMPUS. We aren’t trying to appeal to certain groups of students; we are trying to provide services that matter to EVERY STUDENT.

My name is Darwin Moosavi and I am a third year Environmental Policy Analysis and Planning Major from San Jose, CA. After spending a year as the Environmental Chair at the ASUCD Senate table as an advisor without having a vote on issues I cared deeply about, it became time to stand up and represent YOU. I’ve heard your concerns, I know our campus' struggles, and I feel like I have the knowledge to work with fellow BOLD senators to finally create a student government that will do things that are long lasting and do things that matter.

If elected, I will fight for more capital investments within our units, more student jobs within ASUCD with better pay, ensuring that cooperative housing programs such as the student tri co-ops and domes remain a vibrant part of the UC Davis Community in their time of need, simplifying the Club Finance Council funding process to provide easier access to grants for student run events, and will work towards lobbying the Regents and Sacramento on stopping our fee increases.

If elected I will also implement the following projects:

Empowerment: Create a BIKE-SHARING PROGRAM on campus for easy bike use for students who don’t bike to campus but want an easy way to get around once they are there while working towards adding more bike parking and covered bike parking.

Environment: ELIMINATE PLASTIC BAGS AND STYROFOAM on campus while working towards making ASUCD "zero waste" by expanding composting and recycling.

Entertainment: TURN GUNROCK PUB INTO A SPORTS BAR where students can watch the game after class and even hangout with a few of their professors by extending hours, lowering prices, and showing popular sports games and even Aggie away games.

Bold plans, solid research on how to get there, and goals that will make each and every students experience on campus a better one. BE BOLD> Vote for DARWIN #1 for ASUCD Senate Nov 9th-11th and the rest of the Bold Slate #2-5.

“How do I get more involved in activities that interest me?, When will the CoHo renovation be complete? My bus is always late in the mornings; can you do anything to help?” Do you ever find yourself asking these types of questions but then realize you don’t know how or where to find a solution for your problems? In a time where the UC’s face their largest budget crunch in years and with students being faced by fee increases, cuts in programs, and limited resources, I know you all have more questions and concerns than ever.

My name is Darwin Moosavi and I am a second year Environmental Policy Analysis and Planning Major here at UCD. By electing me for ASUCD Senate, you will be creating a valuable resource that will be accessible at your fingertips—A Senator that believes his number one responsibility is to be a resource to meet YOUR direct needs. That is why if I am elected, I will not only create a blog site to keep students posted on what is happening in student government, but I will also create an email address, [email protected], where I will be able to address any questions or concerns you may have. I may not have all the answers, but having been ASUCD’s Environmental Policy and Planning Commission Chair, and the only Senate Candidate with prior experience at the ASUCD Senate table, I have the resources and the necessary “know-how” required to find them for you.

In addition to addressing any questions or concern you may raise, I have assembled a list of issues that I will fight for once elected as Senator:

1. WORK TOWARDS CREATING DIALOGUE WITH THE UC REGENTS WHILE TAKING THE FIGHT TO SACRAMENTO: It is important to not give up or let down on showing our frustration with the 32% fee increases, however a different approach needs to be taken on how we fight the issue. Although we must continue to voice our concerns to the Regents, more attention should be given to lobbying our legislators in Sacramento to help carry the fight of reforming the UC System for us. I will make sure we have a constant voice and representation at our state capital until we get the attention we deserve.

2.FIGHT TO KEEP THE DAVIS STUDENT CO-OP OPEN: I will work towards keeping such affordable student housing available and affordable. As a first step, I will use all the resources I can to help fight the co-op closures. I will work towards creating more collaboration and communication between ASUCD and Student Housing.

3. MAKE ASUCD ZERO WASTE: Ensuring ASUCD moves towards diverting 100% of its waste from landfills is crucial since an example needs to be set for the rest of the campus to follow in order to reach the UC System-Wide Zero Waste Mandate of 2020.

4.BETTER COMMUNICATION BETWEEN FACULTY AND STUDENTS: One downside of attending a large school like UC Davis is that it is difficult to get to know your professors. However, it doesn’t have to be that way. I will create an outlet where you will be able to meet with willing professors to have conversations on a more personal level: ask them about their careers, how they got to where they are, and make connections and get advice to help direct your own future.

5. IMPROVE TRANSPORTATION: The Unitrans bus system has routes that are often overcrowded, late, or just not at convenient time intervals. I will work with Unitrans to create a more usage oriented schedule instead of a systematic evenly distributed one. I will also work towards getting digital displays at bus stops that will show when the next bus will be arriving (if it is late or not) so they can plan their schedule accordingly.

6. BE MORE ECONOMICAL BY BEING MORE ENVIRONMENTAL: It is often assumed that being environmentally conscious is costly, however there are key things we can work towards that would actually help SAVE the university money at a time we need it most. Ever noticed the sprinklers on during the fall while its raining? Small Adjustments to things such as the school grounds sprinkler systems, heating and cooling systems, and building electricity usage could save resources and money without having any impact on your needs.

So vote for Darwin, the independent candidate who wants to finally give YOU a say in YOUR student government. I have the connections, you have the voice, and together we can make things happen.