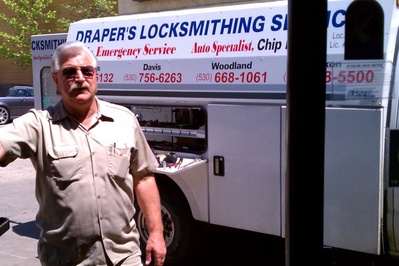 2009-18-12 13:09:59   I had an experience last night where our front door lock broke and the door would not close. I called around and found David Draper of Draper's Locksmithing Service (756-6263). He is based in Winters. I cannot recommend him highly enough. He was excellent in all respects. Most importantly, he came out to my house in Davis in 30 minutes and did a good repair. That was crucial, because it was cold outside and the door would not close. It cost a bit more than I expected — $110 including parts and labor — but I still highly recommend his service. His business card says he offers "Residential, Commercial, Auto, Car Openings, Locks Picked, and Shop or Mobile Service." —RichRifkin

2011-07-13 15:42:30   I had David Draper of Draper's Locksmith Service out today to replace a lock in our house and he provided excellent service! He was kind, timely and thorough. He checked every lock and made sure they worked before he left. He even adjusted some existing locks to make them work better and smoother. I would absolutely call him again! —JoyRobbins

2011-11-24 11:23:36   My girlfriend lost her car keys and could not start her VW, despite having a spare valet key, because the alarm system was engaged. I called David Draper and he looked up the model and year in his books and told us how to disable the alarm (Just disconnecting and reconnecting the battery did not work) at no charge. We tried several things before this from online forums, but this is the only trick that worked!

He could have come out and done it himself and probably charged us $100, but instead he just gave us free information that solved the problem. —CyraEmery

2012-01-08 09:54:34   David Draper of Draper's Locksmithing Service (530-795-5132) did a great job on an unusual job for me. I had a 40-year-old English bike with a built-in lock, but the key was lost years ago. David came to my place of work in Davis and worked diligently to find the right blank and get the lock working again. Because he was on his way to another job, he didn't even charge me for the house call. I highly recommend him. —Campyonlyguy

2013-03-21 15:37:18   David Draper - locksmith did a great job for me, and I would highly recommend his services. I had a lock from a garage door in which the key wouldn't turn (I had already removed it from the door). He's from Winters, but he had a service call (another customer) in Davis, so we arranged where to meet on a particular day when he would be in Davis. This saved me his service call fee. I took the lock to him to be un-jammed; it didn't even require re-keying. Fast, friendly, fair, affordable. —TO987

2013-07-25 14:04:50   I highly recommend David Draper. He helped me out today. Other locksmiths said there was no way to make a key for the camper of my truck. He was able to do it no problem. He also helped me get his bill reimbursed by AAA. Great service. If you can wait a couple days he will make it to you without charging a service fee. Very reasonable prices. —NicholasHall

2015-09-30 21:19:21   David did a great job tonight and we are verypleased. Our front door had become pretty misaligned and was getting extremely difficult to lock. David came by, fixed the door hinges, put in new hardware in the frame for the locks to go into, and now both locks work like butter. He was very nice, did a great job, and was great to work with. I would highly recommend his services. —DebbieS