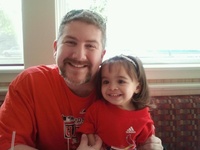 David M. Greenwald is married to Cecilia Escamilla-Greenwald, whom he met on a political campaign, Mark DeSio's State Senate campaign in 1998. David Greenwald came here as a graduate student in Political Science at University of California, Davis. He got his Master's in Political Science in 2007. He grew up in San Luis Obispo, Ca. In 1994, he ran for the school board in San Luis Obispo, narrowly losing in a five person race. He earned a bachelor's degree in political science and history in 1996. In 1996-97, he worked for People for the American Way in Washington, D.C. He also worked on Congresswoman Lois Capps' field operation for her special election in 1997-98 after her husband first term Congressman Walter Capps passed away in November of 1997.

He was out of politics from 1998 until 2006, when his wife, Cecilia, came under fire for her role in pushing for civilian police review in Davis as Chair of the Human Relations Commission. He claims to have no personal political aspirations. Cecilia Escamilla-Greenwald ran for City Council in 2008.

David founded and maintains the political blog, The People's Vanguard of Davis, in August of 2006 posting under the pseudonym, Doug Paul Davis. The Vanguard has become an alternative to the mainstream news in Davis.

In December 2008, David Greenwald was hired as the Editor of the California Progress Report—a liberal blog that covers California politics.

David received the Thong Hy Huynh Memorial Award for Community Education and Awareness in 2009 for his work with the Vanguard.

He and his wife Cecilia became certified foster parents in the fall of 2009 and received Jasmine as a foster child on December 7, 2009. They adopted Jasmine as their daughter on October 24, 2011. They also have nephews Malachi, 8, and Jeremiah 10 mos, who they are guardians for.

In 2010, he launched Yolo Judicial Watch as a side-project of the Vanguard. The project monitors and reports on case and other issue involving the Yolo County Judicial system.

David is of no relation to former Mayor and Councilmember Sue Greenwald.